So Farewell Then Wendy E. Cook 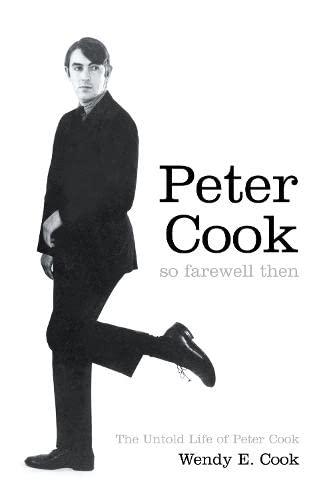 So Farewell Then by Wendy E. Cook

To his many fans, Peter Cook was quite simply the funniest man they never met. Over a decade since his untimely death, his reputation as one of Britain's greatest comics shows no sign of shrinking.

So Farewell Then: The Biography of Peter Cook by Wendy E. Cook

To his many fans, Peter Cook was quite simply the funniest man they never met. Over a decade since his untimely death, his reputation as one of Britain's greatest comics shows no sign of shrinking.

Peter Cook was one of the most significant influences on British comedy of the last 50 years. Caustic, cruel but genuinely and effortlessly witty, Cook was one of the prime architects of the satire boom of the sixties, achieving fame first in the revue 'Beyond The Fringe' with Dudley Moore, Alan Bennett and Jonathan Miller, then in the television comedy sketch show 'Not Only But Also', starring himself and Moore.

The responsibility of being regarded as one of the wittiest men of his generation and the comic guru to the nation could have weighed heavily upon Peter Cook's shoulders. But the one thing Cook always refused adamantly to do was to take life, himself or his career seriously.

Wendy Cook was a teenage art student when she first met the handsome Cambridge undergraduate in the early sixties. They married soon after and together founded the Establishment clubs in London and New York, and financed the satirical magazine 'Private Eye'. Wendy bore Peter his only children and they lived together during the most explosive time in Peter's amazing career. But the price of this stratospheric rise was high.

'I felt eventually I had to go my own way rather than stay with somebody who was that nihilistic. Alcohol stokes up the demons and a completely different person starts to emerge. He did know how to behave well, but it rotted into something else. At a certain point I thought, "This will be the end of me if I don't leave now."'

Finally Wendy took her daughters to Majorca to live on a farm and the couple eventually divorced a few years later in 1971.

Now, putting aside 30 years of discretion about her life with the comedian, Wendy has decided to break her long silence to set down her memories in this long-awaited biography.

Wendy Cook is a writer and nutrionalist who lives in Devon.

GOR011359952
9780007236084
0007236085
So Farewell Then: The Biography of Peter Cook by Wendy E. Cook
Wendy E. Cook
Used - Very Good
Paperback
HarperCollins Publishers
2006-10-02
400
N/A
Book picture is for illustrative purposes only, actual binding, cover or edition may vary.
This is a used book - there is no escaping the fact it has been read by someone else and it will show signs of wear and previous use. Overall we expect it to be in very good condition, but if you are not entirely satisfied please get in touch with us
Trustpilot