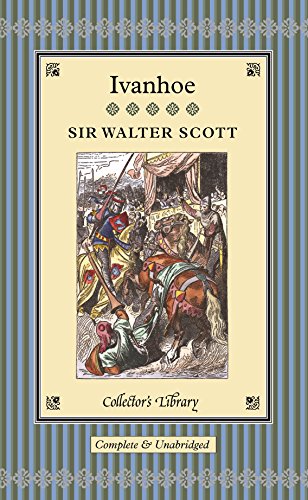 Ivanhoe, first published in 1819, is a spellbinding tale of adventure, chivalry and romance set in twelfth-century England where the Saxons are in conflict with the occupying Normans. Young Wilfred of Ivanhoe, disinherited by his father for wanting to marry his father's ward Rowena, is wounded in a tournament and nursed back to health by the beautiful Rebeccca, who is later accused of being a witch. With the help of Richard the Lionheart and Robin Hood, Ivanhoe is able to save Rebecca, establish peace between Saxon and Norman, and gain the hand of the fair Rowena.

With an Afterword by John Grant.

Sir Walter Scott was born in Edinburgh, Scotland, in 1771. As a child he was entranced by the tales of the Scottish Borders, and soon he was reading broadly in the fields of history and legend; these interests were to mould the later man. After an extensive flirtation with German Romanticism -- he published two translations -- he returned to his initial love, the Borders and their ballads, publishing the important three-volume collection Minstrelsy of the Scottish Borders in 1802-3. The success of this collection, whose texts he had extensively rewritten, led him to publish the extremely popular book-length narrative poem The Lay of the Last Minstrel in 1805. Others followed the widespread popularity of this one, notably The Lady of the Lake (1810). He had become a partner in the printing firm Ballantyne, and in 1813 had to rescue it from bankruptcy, in the process incurring enormous personal debts. To help pay these off, he picked up and finished the text of a novel about the 1745 Jacobite Rebellion that he'd started and abandoned in 1805. When published in 1814, Waverley was a huge success. Writing with phenomenal industry, he followed Waverley with a long string of historical and quasi-historical novels of which Guy Mannering (1815), Old Mortality (1816), Rob Roy (1818), The Heart of Midlothian (1818), The Bride of Lammermoor (1819), Ivanhoe (1819), Kenilworth (1821), The Fortunes of Nigel (1822), Quentin Durward (1823) and Redgauntlet (1824) are among the most noteworthy. These were published anonymously; his authorship of them was not revealed until 1827. Created a baronet in 1820, Scott died in 1832. He is widely regarded as the father of the historical novel.
GOR002841073
9781904633747
1904633749
Ivanhoe by Walter Scott
Walter Scott
Used - Very Good
Hardback
Pan Macmillan
20040801
680
null null null null null null null null null null
Book picture is for illustrative purposes only, actual binding, cover or edition may vary.
This is a used book - there is no escaping the fact it has been read by someone else and it will show signs of wear and previous use. Overall we expect it to be in very good condition, but if you are not entirely satisfied please get in touch with us
Trustpilot