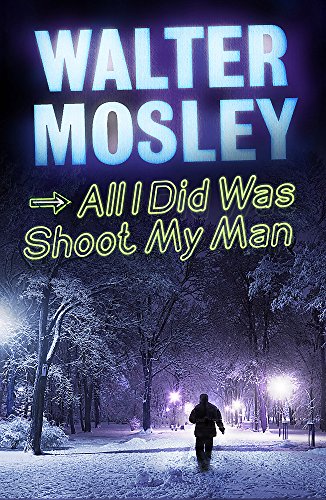 All I Did Was Shoot My Man by Walter Mosley

All I Did Was Shoot My Man by Walter Mosley

Seven years ago Zella Grisham was arrested for illegal possession of a firearm, assault with a deadly weapon, attempted murder and grand theft. After two years of fruitless negotiations Zella was sentenced to 25 years in prison, mainly because she refused to give up her accomplices in a $6.8 million heist from Rutgers Assurance Corp.

But Zella had played no part in that heist. PI Leonid McGill had planted the evidence. All Zella had done was shoot her man, her cheating husband Harry Tangelo, when she'd caught him in bed with her best friend. That was a long time ago, and McGill has regrets. So he hires a hotshot attorney to set her free.

Zella's big regret is that she tried to kill Tangelo. McGill agrees to track him down, but the trail leads back to Rutgers Assurance, and the man who paid McGill to plant the evidence is found dead. As Zella is hounded and an attempt is made on McGill's life, the detective realises the case is more complicated than he had ever imagined - but can he live long enough to sort it out?

Praise for "All I Did Was Shoot My Man" "The best [McGill] book yet."--"The Boston Globe" "Like the city he works in, and the Mosley books he inhabits, Leonid McGill is complicated, savvy and full of surprises: a would-be champ who can't win for losing, a fighter who can never be counted out."--"The Wall Street Journal" "A big city never looks the same once you've walked its streets with a hard-boiled private eye. preferably someone as perceptive and thoughtful as Leonid McGill...[He] doesn't so much walk the city as case it for danger. Keeping pace with him is as much an education as an adventure."--"The New York Times Book Review""Mosley ratchets up the tension with each new installment in his compelling series."--"Star-Ledger" "Walter Mosley has proven over and over again during the past two decades that he is not only one of America's greatest mystery writers, but is one of America's greatest writers period--an American literary treasure. And in "All I Did Was Shoot My Man"...Mosley has given us one of his best works ever. In Leonid McGill, Mosley has created a character Dostoyevsky would have loved. [He] has written a mystery novel that transcends the genre--a private-eye story for the new, uncertain and constantly dangerous century. "All I Did Was Shoot My Man "is one of the best books of [the year] and you can't help but root for Leonid McGill. We have much to look forward to with this series. Kudos to Walter Mosley."--BookReporter.com "The best in the series to date...complex, satisfying."--"Publishers Weekly" "Exceptional storytelling."--"Library Journal"
Walter Mosley is the author of more than thirty-four critically acclaimed books, including the now classic Easy Rawlins mystery series. Mosley's books havebeen translated into more than twenty-one languages and have sold more than three million copies to date. The winner of an O. HENRY AWARD, a GRAMMY, and PEN AMERICA'S LIFETIME ACHIEVEMENT AWARD, he lives in New York City.
GOR004798422
9781780220963
1780220960
All I Did Was Shoot My Man by Walter Mosley
Walter Mosley
The Leonid McGill Mysteries
Used - Very Good
Paperback
Orion Publishing Co
2013-04-04
336
Short-listed for Edgar Award for Best Novel 2013 (UK)
Book picture is for illustrative purposes only, actual binding, cover or edition may vary.
This is a used book - there is no escaping the fact it has been read by someone else and it will show signs of wear and previous use. Overall we expect it to be in very good condition, but if you are not entirely satisfied please get in touch with us
Trustpilot