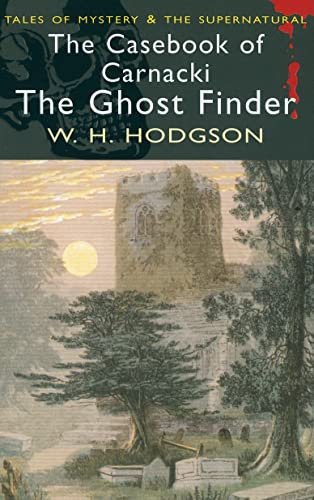 The Casebook of Carnacki The Ghost-Finder by W.H. Hodgson

Thomas Carnacki is a ghost-finder, an Edwardian psychic detective, investigating a wide range of terrifying hauntings presented in the nine stories in this complete collection of his adventures.

The Casebook of Carnacki The Ghost-Finder by W.H. Hodgson

Edited with an Introduction by David Stuart Davies.

'I saw something terrible rising up through the middle of the 'defence'. It rose with a steady movement. I saw it pale and huge through the whirling funnel of cloud - a monstrous pallid snout rising out of that unknowable abyss. It rose higher and higher. Through a thinning of the cloud I saw one small eye... a pig's eye with a sort of vile understanding shining at the back of it'.

Thomas Carnacki is a ghost finder, an Edwardian psychic detective, investigating a wide range of terrifying hauntings presented in the nine stories in this complete collection of his adventures.

Encountering such spine-chilling phenomena as 'The Whistling Room', the life-threatening dangers of the phantom steed in 'The Horse of the Invisible' and the demons from the outside world in 'The Hog', Carnacki is constantly challenged by spiritual forces beyond our knowledge. To complicate matters, he encounters human skullduggery also. Armed with a camera, his Electric Pentacle and various ancient tomes on magic, Carnacki faces the various dangers his supernatural investigations present with great courage.

These exciting and frightening stories have long been out of print. Now rewaders can thrill to them again in this new Wordsworth series.

GOR001975929
9781840225297
1840225297
The Casebook of Carnacki The Ghost-Finder by W.H. Hodgson
W.H. Hodgson
Tales of Mystery & The Supernatural
Used - Very Good
Paperback
Wordsworth Editions Ltd
2006-07-05
192
N/A
Book picture is for illustrative purposes only, actual binding, cover or edition may vary.
This is a used book - there is no escaping the fact it has been read by someone else and it will show signs of wear and previous use. Overall we expect it to be in very good condition, but if you are not entirely satisfied please get in touch with us
Trustpilot