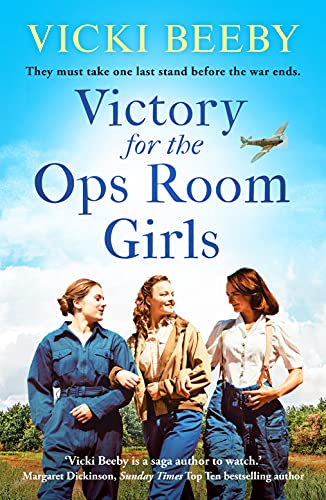 Victory for the Ops Room Girls by Vicki Beeby

Victory for the Ops Room Girls: The heartwarming conclusion to the bestselling WW2 series by Vicki Beeby

With Jess newly promoted to Filterer Officer at RAF Fighter Command HQ, she is delighted to be reunited with Evie and May. However, now that they can enjoy socialising in London, Jess fears her friends will discover the secret she keeps there.

When Jess bumps into Milan unexpectedly, sparks are reignited - did she make a mistake, finishing with him in Amberton? But matters are complicated when a film company arrives at Bentley Priory to make a morale-boosting movie about the RAF. The lead actor is none other than Leonard Steele, a man from Jess's past who could ruin everything she has worked so hard to build...

As her past and present collide, will Jess find the strength to fight for her future?

Vicki Beeby writes historical fiction about the friendships and loves of service women brought together by the Second World War. She was a civil engineer before becoming a maths teacher and education consultant. In her free time, she enjoys walking and travelling to far-off places by train. She lives in Shropshire in a house that doesn't contain nearly enough bookshelves.
GOR011604898
9781800322059
1800322054
Victory for the Ops Room Girls: The heartwarming conclusion to the bestselling WW2 series by Vicki Beeby
Vicki Beeby
The Women's Auxiliary Air Force
Used - Very Good
Paperback
Canelo
20210722
352
N/A
Book picture is for illustrative purposes only, actual binding, cover or edition may vary.
This is a used book - there is no escaping the fact it has been read by someone else and it will show signs of wear and previous use. Overall we expect it to be in very good condition, but if you are not entirely satisfied please get in touch with us
Trustpilot