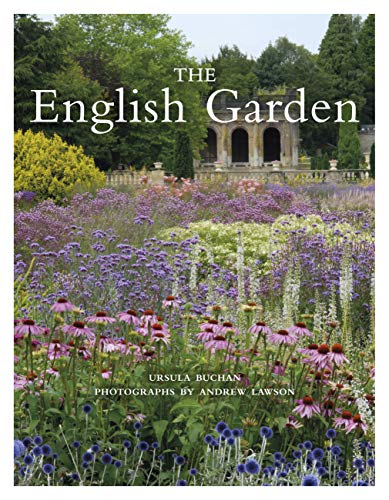 A revised edition of the best-selling classic exploring the English garden, engagingly narrated, illustrated by over 350 colour photographs: armchair garden-visiting at its best.

Visit some of the best English gardens without moving from your armchair with this best-selling classic which features over 350 colour photographs.

Gardening writer Ursula Buchan has combined forces with garden photographer Andrew Lawson to explore the English garden and capture its richness and diversity, explaining the historical trends and the work of garden makers of the past that have shaped the English gardens we see today.

Exploring many garden styles including formality, the landscape tradition, the Arts and Crafts style, the cottage garden and recent phenomena such as New Naturalism, the book discusses themes such as colour, water, ornament and foreign influences, as well as such defining characteristics as the very English urge to grow flowers and the nation's love of roses.

An invaluable, comprehensive and beautifully illustrated guide to one of the most established gardening traditions in the world, this book offers unmissable insight into the world of the English garden.

Ursula Buchan is an award-winning garden journalist and author with more than 30 years' experience. After Cambridge University, she trained as a gardener at the Royal Horticultural Society's gardens at Wisley and at the Royal Botanic Gardens, Kew. She has presented two series on flower shows for Channel 4 and has appeared on BBC radio. She has written columns for the Observer, Sunday Telegraph, Independent, the Spectator, the Daily Telegraph and The Garden magazine and has published many books.

ANDREW LAWSON is widely regarded as England's leading garden photographer. He has provided the photographs for many books, including Good Planting by Rosemary Verey, Penelope Hobhouse on Gardening, Designing Gardens (9780711217577) by Arabella Lennox Boyd, Little Sparta (9780711220850) by Jessie Sheeler, The Garden at Highgrove by HRH Prince of Wales, and The English Garden (9780711226388)by Ursula Buchan and The New English Garden (9780711232709) also by Tim Richardson. He holds the Royal Horticultural Society's Gold Medal for Photography and the Lifetime Achievement Award of the Garden Writer's Guild. His garden in Oxfordshire is open under the National Gardens Scheme.

GOR009137448
9780711239166
0711239169
English Garden by Ursula Buchan
Ursula Buchan
Used - Very Good
Hardback
Frances Lincoln Publishers Ltd
20171005
320
N/A
Book picture is for illustrative purposes only, actual binding, cover or edition may vary.
This is a used book - there is no escaping the fact it has been read by someone else and it will show signs of wear and previous use. Overall we expect it to be in very good condition, but if you are not entirely satisfied please get in touch with us
Trustpilot