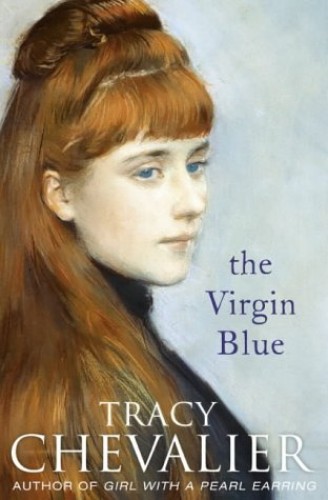 The Virgin Blue by Tracy Chevalier

Ella Turner does her best to fit in to the small, close-knit community of Lisle-sur-Tarn. She even changes her name back to Tournier, and knocks the rust off her high school French - in vain. Isolated and lonely, she is drawn to investigate her Tournier ancestry.

The Virgin Blue by Tracy Chevalier

'A triumph. Excellent' Time Out

'A beautifully crafted story shot with vivid colours' The Times

She was called Isabelle, and when she was a small girl her hair changed colour in the time it takes a bird to call to its mate...

Midwife Isabelle du Moulin is marked as different, by both her red hair and her love for the Virgin Mary in her rich blue robes. As religious fervour sweeps 16th-century France, Isabelle's striking likeness to the Madonna puts her in danger when her village is enraptured by new Protestant doctrine.

Four centuries later, Ella Turner moves to the French village of Lisle-sur-Tarn and finds her dreams are haunted by the colour blue. Ella hopes to become both a midwife and a mother, but her plans unravel as she discovers her link to Isabelle, and her ancestor's shocking fate.

'Tracy Chevalier's first novel is a triumph. Excellent' Time Out

'A beautifully crafted story shot with vivid colours' The Times

Tracy Chevalier is the author of six novels, including the international bestseller Girl with a Pearl Earring, Remarkable Creatures, The Virgin Blue, Falling Angels, and The Lady and the Unicorn. Born in Washington, DC, she moved to London in 1984, where she lives with her husband and son. She has a website at www.tchevalier.com.

GOR000515107
9780007108275
0007108273
The Virgin Blue by Tracy Chevalier
Tracy Chevalier
Used - Very Good
Paperback
HarperCollins Publishers
2002-11-04
312
N/A
Book picture is for illustrative purposes only, actual binding, cover or edition may vary.
This is a used book - there is no escaping the fact it has been read by someone else and it will show signs of wear and previous use. Overall we expect it to be in very good condition, but if you are not entirely satisfied please get in touch with us
Trustpilot