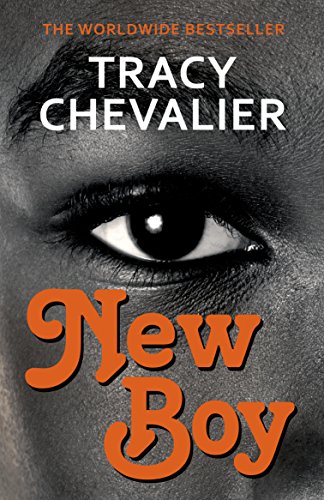 'A compact and intense read full of twists, turns and intrigue' Daily Express

The bestselling author of Girl with a Pearl Earring and The Last Runaway returns with a tale of jealousy, bullying and revenge.

Arriving at his fourth school in six years, diplomat's son Osei knows he needs an ally if he is to survive his first day - so he's lucky to hit it off with Dee, the most popular girl in school. But one student can't stand to witness this budding relationship: Ian decides to destroy the friendship between the black boy and the golden girl. By the end of the day, the school and its key players - teachers and pupils alike - will never be the same again.

The tragedy of Othello is transposed to a 1970s suburban Washington schoolyard in Tracy Chevalier's powerful drama of friends torn apart.

High school, with its crushes, insecurities and politics, works as the perfect backdrop to Shakespeare's original plot... New Boy, with its angsty teenagers, racial frictions and a magnificently fleshed out antagonist, is a tense and tight read... It can be read in a single afternoon and it really is a heady rollercoaster of emotions, right to the breathless and shocking last line -- Tanya Sweeney * Irish Independent *
This is a compact and intense read full of twists, turns and intrigue. The fast-moving shifting allegiances and rivalries that dominate the playground provide a backdrop full of heightened emotion that cleverly reflects the atmosphere of the original play -- Mernie Gilmore * Daily Express *
Chevalier is at her best when describing the tenderness of young love or conveying the inner thoughts of her protagonists ... Chevalier deftly and succinctly gives [her characters] all more of a backstory than Shakespeare ever allowed ... transposing this story to the playground makes absolute sense. It is of interest as an exercise in illustrating the universality of the original, and works equally well as a standalone piece which tells of a tightly wound, intimately imagined situation hurtling towards inevitable tragedy -- Kirsty McLuckie * Scotland on Sunday *
What Chevalier has done is recast the play to illuminate the peculiar trials of our era... a fascinating exercise ... In Chevalier's handling, the insidious manipulations of Othello translate smoothly to the dynamics of a sixth-grade playground, with all its skinned-knee passions and hop-scotch rules ... How Chevalier renders Iago's scheme into the terms of a modern-day playground provides some wicked delight. She's immensely inventive about it all -- Ron Charles * Washington Post *
Chevalier's modern interpretation of Othello deftly explores race relations in the schoolyard in 1970s suburban Washington, and captures how it feels to be an outsider -- Anita Sethi * i, 2017 Books of the Year *
Othello as a Seventies schoolyard drama? Yes, it works marvellously. The emotions of emerging adolescence are a potent brew, with friendships, rivalries, budding sexuality, and the desire to fit in combining unflinchingly with the racism of the teachers (and some of the pupils). This is an evocative retelling of Shakespeare, and his characters' interactions and motivations fit surprisingly well into the brutal world of childhood -- Joanne Harris
Powerful and intriguing -- Deidre O'Brien * Sunday Mirror *
To add urgency to an everyday story of high-school bullying, [Chevalier] compresses the action into the cycle of a school day. It's a clever strategy, executed with typical aplomb by the gifted author of Girl With a Pearl Earring... Her New Boy is an often inspired riff on adolescence and alienation -- Robert McCrum * The Observer *
New Boy is in the tradition of movies such as 10 Things I Hate About You or West Side Story, or Toni Morrison's play Desdemona ... A deft examination of the accommodations a boy such as Osei must make wherever he goes ... Chevalier is delicate in her description of the emotional and mental cost of all this careful avoidance -- Ellah Wakatama Allfrey * The Guardian *

Tracy Chevalier is best known for her historical novels, including the international bestseller Girl with a Pearl Earring and, most recently, At the Edge of the Orchard. She is also editor of Reader, I Married Him: Stories Inspired by Jane Eyre. She lives with her family in London.

Tracy was born in Washington, D.C. and went to an elementary school with a majority of black students. This experience led her to choose to rewrite Othello. 'Othello is about what it means to be the outsider, and that feeling can start at an early age. We have all at one time or another stood on the edge of a playground, with the bullies circling, wondering if we are going to be accepted.'

GOR009149204
9781784700249
178470024X
New Boy by Tracy Chevalier
Tracy Chevalier
Hogarth Shakespeare
Used - Very Good
Paperback
Vintage Publishing
2018-04-02
192
N/A
Book picture is for illustrative purposes only, actual binding, cover or edition may vary.
This is a used book - there is no escaping the fact it has been read by someone else and it will show signs of wear and previous use. Overall we expect it to be in very good condition, but if you are not entirely satisfied please get in touch with us
Trustpilot