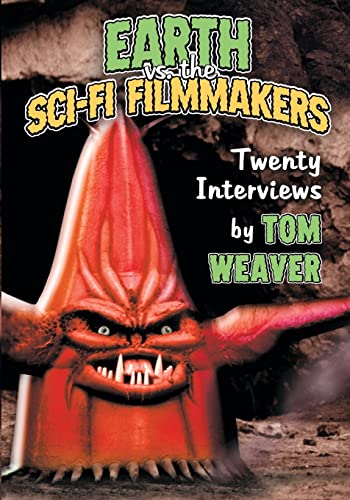 Earth vs. the Sci-Fi Filmmakers by Tom Weaver

Perhaps no films attracted more rabid fans and less critical acclaim than black-and-white horror and sci-fi movies . The men and women who made the characters come to life are interviewed here, talking about their work, the behind-the-scenes action, and the impact the movies had on their careers.

Earth vs. the Sci-Fi Filmmakers: 20 Interviews by Tom Weaver

Back in the era of black-and-white horror and sci-fi movies, we didn't have special effects, or the money for 'em, says Peter Graves, one of the genre's most popular stars. But in those days, an unlimited amount of money wouldn't have gotten us much better special effects, because they didn't exist. We had to go with the stories and try to make them as believable as possible, and flash the outlandish things by quickly, so the audience never got a good, in-focus look at them!

the king of the monster hunters - USA Today
Tom Weaver lives in Tarrytown, New York, and has been interviewing moviemakers since the early 1980s. The New York Times called him one of the leading scholars in the horror field and USA Today has described him as the king of the monster hunters. Classic Images called him the best interviewer we have today. He is a frequent contributor to numerous film magazines including Starlog, Fangoria, Monsters from the Vault and Video Watchdog, and he has been featured in the prestigious Best American Movie Writing. A frequent DVD audio commentator, he is the author of numerous reference and other nonfiction books about American popular culture, including Universal Horrors: The Studio's Classic Films, 1931-1946.
NLS9780786495726
9780786495726
0786495723
Earth vs. the Sci-Fi Filmmakers: 20 Interviews by Tom Weaver
Tom Weaver
New
Paperback
McFarland & Co Inc
2014-06-23
396
N/A
Book picture is for illustrative purposes only, actual binding, cover or edition may vary.
This is a new book - be the first to read this copy. With untouched pages and a perfect binding, your brand new copy is ready to be opened for the first time
Trustpilot