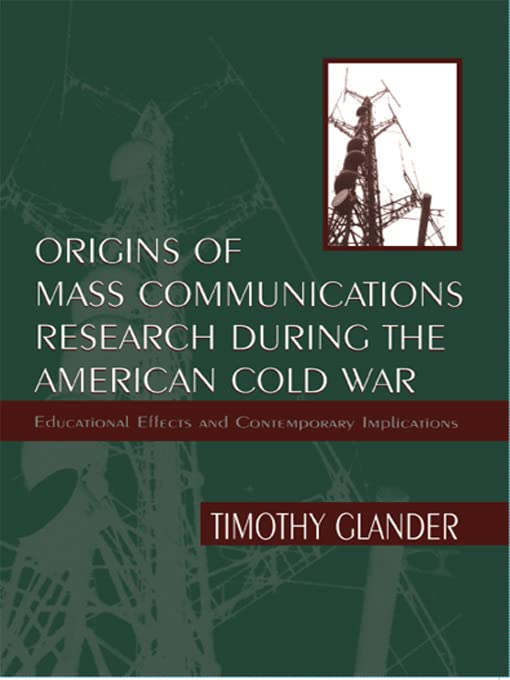 This critical examination of the origins of mass communication research from the perspective of an educational historian investigates the educational meaning of mass media, with the goal of understanding the essential connection between education and communication.

In this critical examination of the beginnings of mass communications research in the United States, written from the perspective of an educational historian, Timothy Glander uses archival materials that have not been widely studied to document, contextualize, and interpret the dominant expressions of this field during the time in which it became rooted in American academic life, and tries to give articulation to the larger historical forces that gave the field its fundamental purposes. By mid-century, mass communications researchers had become recognized as experts in describing the effects of the mass media on learning and other social behavior. However, the conditions that promoted and sustained their authority as experts have not been adequately explored. This study analyzes the ideological and historical forces giving rise to, and shaping, their research.

Until this study, the history of communications research has been written almost entirely from within the field of communications studies and, as a result, has tended to refrain from asking troubling foundational questions about the origins of the field or to entertain how its emergence shaped educational discourse during the post-World War II period. By examining the intersection between the individual biographies of key leaders in the communications field (Wilbur Schramm, Paul Lazarsfeld, Bernard Berelson, Hadley Cantril, Stuart Dodd, and others) and the larger historical context in which they lived and worked, this book aims to tell part of the story of how the field of communications became divorced from the field of education. The book also examines the work of significant voices on the rise of mass communications study (including C. Wright Mills, William W. Biddle, Paul Goodman, and others) who theorized about the emergence of a mass society. It concludes with a discussion of the contemporary relevance of the theory of a mass society to educational thought and practice.

Glander's book is important, and it will be widely read and discussed. It fills a significant gap in our understanding of the origins of the field of communication research. It balances the internal histories written by the founding fathers and their academic descendants.
-Journalism & Mass Communication Quarterly

Professor Glander has given us a solid and stimulating book...[The] chapters are thoughtful, reasonably well researched, and contain much valuable information useful to scholars and commentators.
-History of Education Quarterly

Altogether, Glander's Origins of Mass Communications Research During the American Cold War offers a fresh analysis of the factors that gave rise to communication study and research on university campuses.
-Educational Change

...the investigation of the field has been limited; Glander hopes to remedy this problem by examining research methodology through researching the men and times that produced it. Quite an undertaking--and one that he accomplishes while raising a great many pertinent questions.
-Communication Booknotes Quarterly

This book is in the grand tradition of cultural and educational criticism that we associate with John Dewey or Noam Chomsky. It is a sober and careful and accurate approach to an immensely important subject long ignored or deliberately buried by scholars and state agencies bent on promoting disinformation to citizens and educators....An outstanding and critical contribution to the study of education, communications, and mass media.
-John Marciano
State University of New York at Cortland

An exhaustive critical examination of the intellectual origins of communications research in 20th-century America, with particular attention to the developing links between university campuses, the military, and the media industry....Scholars looking for a thorough and authoritative treatment of mass communications research during its early years will not be disappointed. This book is loaded with the kind of rich historical insights (and sometimes explosive information) that can only come from an historian totally immersed and grounded in the primary source literature....It will undoubtedly generate a new debate in the field and raise critical questions about the nature and goals of communications research as it was developed and implemented in leading research universities across the country.
-Christine Shea
East Carolina University

Contents: Preface. Education and Propaganda: The Propaganda Debate Between the Wars. Communications Research Comes of Age. The Social Ideas of American Mass Communications Experts. Paul F. Lazarsfeld and the Bureau of Applied Social Research. Wilbur Schramm and the Founding of Communication Study. The Universe of Discourse in Which We Grew Up. Conclusion.
NLS9780805827354
9780805827354
0805827358
Origins of Mass Communications Research During the American Cold War: Educational Effects and Contemporary Implications by Timothy Glander
Timothy Glander
Sociocultural, Political, and Historical Studies in Education
New
Paperback
Taylor & Francis Inc
1999-12-01
252
N/A
Book picture is for illustrative purposes only, actual binding, cover or edition may vary.
This is a new book - be the first to read this copy. With untouched pages and a perfect binding, your brand new copy is ready to be opened for the first time
Trustpilot