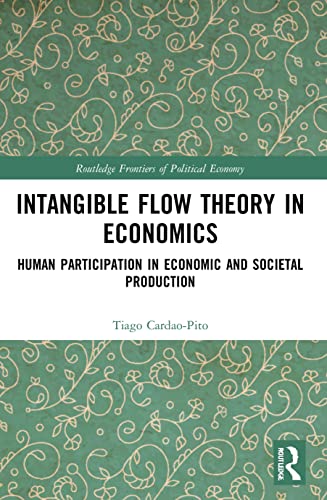 The dominant economic explanations of the twentieth century are not comprehensive enough to describe the complexity of economy and society, and their reliance on the biosphere. This book outlines a new theory which challenges both economics and the relativism conveyed in social constructivism, poststructuralism and postmodernism.

The dominant economic explanations of the 20th century are not comprehensive enough to describe the complexity of economy and society and their reliance on the biosphere. Intangible Flow Theory in Economics: Human Participation in Economic and Societal Production outlines a new theory that challenges both economics and the relativism conveyed in social constructivism, poststructuralism and postmodernism.

To mainstream economics and Marxism, monetary flows transform us humans into commodities. To this new theory, flows of economic elements as physical goods or money are consummated by intangible flows that cannot yet be precisely appraised at an actual or approximate value, for instance, workflows, service flows, information flows or communicational flows. The theory suggests a systematic alternative to refute the human commodity framework and interrelated conjectures (e.g. human capital, human resources, human assets). Furthermore, it exhibits that economic and societal production is fully integrated on the biosphere. Conversely, contemporary relativism argues for the end of theory development, suspension of evidence and entrenchment of knowledge validity among local systems (named as paradigms, epistemes, research programs, truth regimes or other terms). Thus, relativism tacitly supports dominant theories as the human commodity framework because it preventively sabotages the creation of new theoretical explanations. Disputing relativist theses, intangible flow theory demonstrates that innovative theoretical explanations remain possible.

This book is of significant interest to students and scholars of political economy, economic sociology, organization, economics and social theory.

This book by Tiago Cardao-Pito contains many significant achievements. Most importantly, it provides a novel perspective for appreciating the reality of socioeconomic provisioning processes that has the potential to refine our ontological conceptions, without constraining established accounts.

[T]his is a book that is impressive in the variety of topics addressed, ranging from sociology, political theory, economics, and, especially, classical philosophy and metaphysics...[T]he readership will encounter a well-grounded theoretical book that adds new complexities to the already contested economic theories on hedonism, rational choice, and, especially, the mastering of what empirical data can actually show.

NGR9780367644154
9780367644154
0367644150
Intangible Flow Theory in Economics: Human Participation in Economic and Societal Production by Tiago Cardao-Pito
Tiago Cardao-Pito
Routledge Frontiers of Political Economy
New
Paperback
Taylor & Francis Ltd
2022-08-01
324
N/A
Book picture is for illustrative purposes only, actual binding, cover or edition may vary.
This is a new book - be the first to read this copy. With untouched pages and a perfect binding, your brand new copy is ready to be opened for the first time
Trustpilot