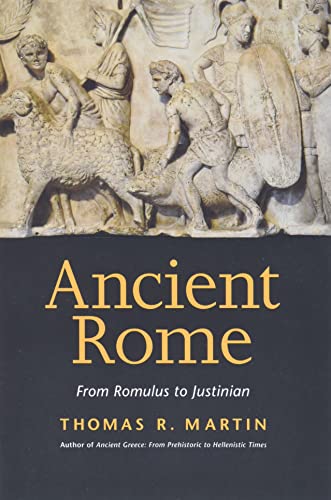 Encompassing the period from Rome's founding in the eighth century BC through Justinian's rule in the sixth century AD, the author offers a distinctive perspective on the Romans and their civilization by employing fundamental Roman values as a lens through which to view both their rise and spectacular fall.

Ancient Rome: From Romulus to Justinian by Thomas R. Martin

A beautifully written, highly accessible, and comprehensive history of Rome from its founding in the eighth century BC through to Justinian in the sixth century CE.

With commanding skill, Thomas R. Martin tells the remarkable and dramatic story of how a tiny, poor, and threatened settlement grew to become, during its height, the dominant power in the Mediterranean world for five hundred years. Encompassing the period from Rome's founding in the eighth century B.C. through Justinian's rule in the sixth century A.D., he offers a distinctive perspective on the Romans and their civilization by employing fundamental Roman values as a lens through which to view both their rise and spectacular fall.

Interweaving social, political, religious, and cultural history, Martin interprets the successes and failures of the Romans in war, political organization, quest for personal status, and in the integration of religious beliefs and practices with government. He focuses on the central role of social and moral values in determining individual conduct as well as decisions of state, from monarchy to republic to empire. Striving to reconstruct ancient history from the ground up, he includes frequent references to ancient texts and authors, encouraging readers to return to the primary sources. Comprehensive, concise, and accessible, this masterful account provides a unique window into Rome and its changing fortune.

"In this survey of ancient Greek history and civilization, Martin skillfully blends social, cultural, political, and military data to create a panoramic view of the Greek world. Novices will find the work both comprehensible and entertaining."-Library Journal

"Some 20 years after the success of his Ancient Greece: From Prehistoric to Hellenistic Times (Yale UP), Thomas R Martin gives the same treatment to a potted history of Rome, with great success. . . . It is to the credit of the author that, even in a few pages, there seem to be no omissions of events, incidents or figures who helped shape the history of Rome. . . . It remains . . . an immensely readable and engaging history, which shows incredible breadth, given its brevity."-Geoff Lowsley, Minerva

Thomas R. Martin is professor of Classics at the College of the Holy Cross. His publications include Ancient Greece: From Prehistoric to Hellenistic Times, Herodotus and Sima Qian: The First Great Historians of Greece and China, and, as co-author, The Making of the West: Peoples and Cultures. He lives in Sutton, MA.