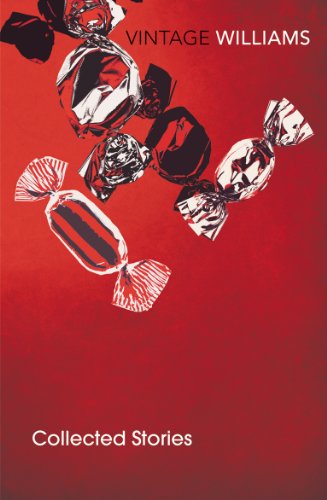 Acclaimed as one of America's most successful playwrights, the author also published four volumes of short stories. In this title, these volumes are combined with a wealth of unpublished and uncollected work, ranging from his first his story published in "Weird Tales" when he was seventeen, to his later frank homosexual fantasies.

'Disturbing, moving, and funny; these stories help amplify Williams's tragic vision, for like the plays, they underline his preoccupation and insight into the conflicts of the human heart'
New York Times

Acclaimed as one of America's most successful playwrights, Tennessee Williams also published four volumes of short stories. In Collected Stories, these volumes are combined with a wealth of unpublished and uncollected work, ranging from his first his story published in `Weird Tales' when William was seventeen, to his later frank homosexual fantasies.

Williams was famous for insisting he write every morning. Even during his darkest days, while mourning a lover, or abusing some substance - he would write. The Collected Stories are from every period of his life, and recreate the milieux Williams knew and chronicled so movingly - from his gypsy youth in St. Louis and New Orleans to his days of celebrity in Hollywood and New York.

'The two ingredients of Williams's plays - great gab and steamy sex - are both here in the stories' Edmund White, Sunday Times

Funny, bizarre, often moving and always brave -- Sunday Times
I yearned for a bad influence and boy, was Tennessee one in the best sense of the word: joyous, alarming, sexually confusing and dangerously funny -- John Waters
Williams's ear for dialogue, eye for character, and exploration of love, longing and loneliness are as powerful in these stories as they are in his plays. * John Berendt, author of Midnight In The Garden Of Good And Evil *
There used to be two streetcars in New Orleans. One was named Desire and the other was called Cemeteries. To get where you were going, you changed from the first to the second. In these stories, Tennessee validated with his genius our common ticket of transfer -- Gore Vidal
As in the plays, it is the force and adroitness of his curiosity that impresses. * Guardian *
Tennessee Williams was born in 1911 in Mississippi. He entered college during the Depression and left after a couple of years to work in a shoe company. He entered the University of Iowa in 1938 and received a Rockefeller Fellowship in 1940 for his play Battle of Angels. Williams wrote over thirty plays including The Glass Menagerie (1944), A Street Car Named Desire (1947) and Cat on a Hot Tin Roof (1955). He won the Pulitzer Prize in 1948 and 1955. Tennessee Williams died in 1983
GOR001172521
9780749395810
0749395818
Collected Stories by Tennessee Williams
Tennessee Williams
Used - Very Good
Paperback
Vintage Publishing
1996-04-15
672
N/A
Book picture is for illustrative purposes only, actual binding, cover or edition may vary.
This is a used book - there is no escaping the fact it has been read by someone else and it will show signs of wear and previous use. Overall we expect it to be in very good condition, but if you are not entirely satisfied please get in touch with us
Trustpilot