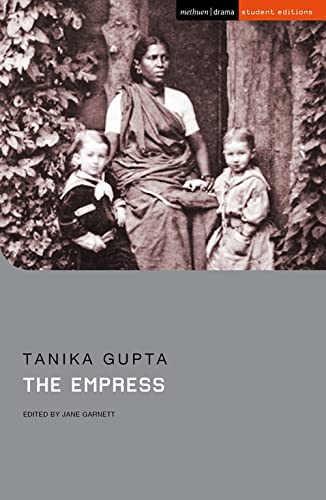 The Empress by Tanika Gupta

The Empress by Tanika Gupta

Queen Victoria's Golden Jubilee, 1887. At East London's Tilbury Docks, Rani Das and Abdul Karim, step ashore after the long voyage from India. One has to battle a society who deems her a second-class citizen; the other forges an astonishing entanglement with the ageing Queen Victoria who finds herself enchanted by stories of an India over which she rules, but has never seen. Through narrative, music and song, The Empress blends the true story of Queen Victoria's controversial relationship with her Indian servant and 'Munshi' (teacher), Abdul Karim, with the experiences of Indian ayahs who came to Britain during the 19th century. With private romance being mapped onto world history, the action cuts between the ship and different royal residences, offering bright contrasts as well as surprising affinities. In doing so, the play uncovers remarkable unknown stories of 19th-century Britain and charts the growth of Indian nationalism and the romantic proclivities of one of Britain's most surprising monarchs. The Empress, which premiered at Stratford-upon-Avon's RSC in 2013, is published here as a Methuen Drama Student Edition with commentary and notes by Professor Jane Garnett, Wadham College, University of Oxford, UK.
Gupta's play records the rage felt at the injustices of imperial domination. * Guardian *
The epic journey of the five characters in The Empress is not only magical and intoxicating, but historically enlightening. * Birmingham Mail *
Tanika Gupta was born in London the year after her parents arrived from Calcutta. Over 20 years, she has written over 20 stage plays that have been produced in major theatres across the UK. She has written 30 radio plays for the BBC and several original television dramas, as well as scripts for EastEnders, Grange Hill and The Bill. She has taught drama and run workshops in South Africa, Australia, New Zealand, Cuba, India, USA, the Netherlands, Germany, Argentina, Chile and across the UK. She is a fellow of Rose Bruford College, runs courses for the Arvon Foundation and has led playwriting workshops in many UK universities, as well as for the National, Royal Court, Hampstead and Young Vic theatres and Theatre Royal Stratford East. She has been writer-in-residence at the National Theatre and Soho Theatre, a fellow at the Playwright's Studio in Glasgow and a writing tutor in HMP Winchester. She has won numerous awards for her work and is presently a visiting lecturer at Royal Holloway, University of London, and the Royal Central School of Speech and Drama. Professor Jane Garnett is Fellow and Tutor in Modern History at Wadham College, Oxford, UK. Dr Garnett's research is on intellectual, cultural and religious history, predominantly of the nineteenth and twentieth centuries, including the study of gender and visual culture over wider periods. She was Consultant Editor for Women on the Oxford Dictionary of National Biography (1994-2004), as well as acting as Associate Editor for Victorian Women Philanthropists.
Chronology COMMENTARY PLAYWRIGHT CONTEXT 1. Late-19th-century imperial context 2. Context within which the play was written and rehearsed in 2012/13 3. RSC's commissioning strategy for new plays THEMES 1. Class 2. Race 3. Gender 4. Religion 5. British Empire CHARACTERS (HISTORICAL & FICTIONAL) & CHARACTERISATION DIALOGUE DRAMATIC DEVICES 1. RSC production: sets, costumes, role of instrumental music and song 2. Use of short scenes to create a visual and textual mosaic RESPONSE Audience and press response PLAY TEXT FURTHER READING AND VIEWING
NGR9781350190573
9781350190573
1350190578
The Empress by Tanika Gupta
Tanika Gupta
Student Editions
New
Paperback
Bloomsbury Publishing PLC
2022-03-24
152
N/A
Book picture is for illustrative purposes only, actual binding, cover or edition may vary.
This is a new book - be the first to read this copy. With untouched pages and a perfect binding, your brand new copy is ready to be opened for the first time
Trustpilot