Y is for Yesterday Sue Grafton 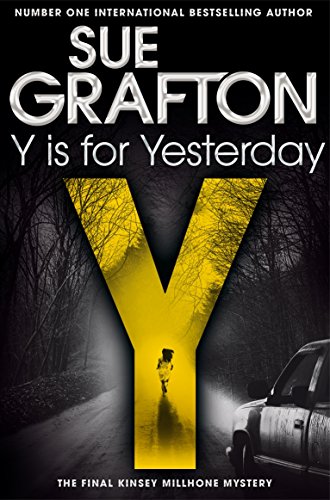 The alphabet mysteries continue with a harrowing case for private investigator Kinsey Millhone.

Y is for Yesterday is the twenty-fifth in the Kinsey Millhone mystery series by Sue Grafton.

The darkest and most disturbing case report from the files of Kinsey Millhone, Y is for Yesterday begins in 1979, when four teenage boys from an elite private school sexually assault a fourteen-year-old classmate - and film the attack. Not long after, the tape goes missing and the suspected thief, a fellow classmate, is murdered. In the investigation that follows, one boy turns in evidence for the state and two of his peers are convicted. But the ringleader escapes without a trace.

Now, it's 1989 and one of the perpetrators, Fritz McCabe, has been released from prison. Moody, unrepentant, and angry, he is a virtual prisoner of his ever-watchful parents - until a copy of the missing tape arrives with a ransom demand. That's when the McCabes call Kinsey Millhone for help. As she is drawn into their family drama, she keeps a watchful eye on Fritz. But he's not the only one being haunted by the past. A vicious sociopath with a grudge against Millhone may be leaving traces of himself for her to find . . .

This will leave readers both relishing another masterful entry and ruing the near-end of this series. Prime Grafton * Booklist *
Grafton once again proves herself a superb storyteller * Publishers Weekly *
Grafton constructs an intricate plot following two time lines with at least a dozen characters in play while rarely slowing the pace * Library Journal *
I'm going to miss Kinsey Millhone. Ever since the first of Sue Grafton's Alphabet mysteries, A Is For Alibi, came out in 1982, Kinsey has been a good friend and the very model of an independent woman, a gutsy Californian P.I. rocking a traditional man's job . . . It's Kinsey herself who keeps this series so warm and welcoming. She's smart, she's resourceful, and she's tough enough to be sensitive on the right occasions * New York Times *
Y Is for Yesterday is one of the strongest novels in the series as the beloved lady sleuth Kinsey Millhone, the perennial main character, is hired to investigate the aftermath of a ten-year-old murder involving high-school students. The milieu - wealth and privilege in a beautiful California setting - is enticing, as are the cast of colourful regulars. This story of teenagers gone bad runs in parallel with a deadly threat to Kinsey's life, and the ending is truly satisfying, in more ways than one. * The Times *
Sue Grafton was one of the most popular female writers, both in the UK and in the US. Born in Kentucky in 1940, she began her career as a TV scriptwriter before Kinsey Millhone and the 'alphabet' series took off. Two of the novels B is for Burglar and C is for Corpse won the first Anthony Awards for Best Novel. Sue wrote twenty-five novels in her alphabet series, the last was Y is for Yesterday, before her death in California in December 2017.
GOR009431242
9781509894000
1509894004
Y is for Yesterday by Sue Grafton
Sue Grafton
Kinsey Millhone Alphabet series
Used - Very Good
Paperback
Pan Macmillan
2018-08-09
608
N/A
Book picture is for illustrative purposes only, actual binding, cover or edition may vary.
This is a used book - there is no escaping the fact it has been read by someone else and it will show signs of wear and previous use. Overall we expect it to be in very good condition, but if you are not entirely satisfied please get in touch with us
Trustpilot