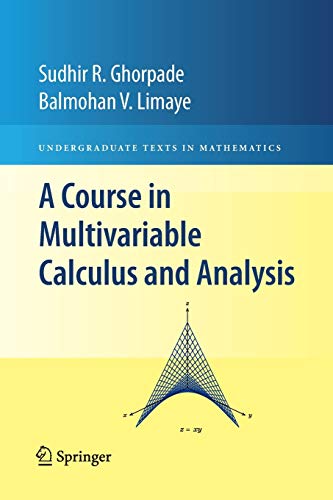 A Course in Multivariable Calculus and Analysis by Sudhir R. Ghorpade

A Course in Multivariable Calculus and Analysis by Sudhir R. Ghorpade

This book is distinguished from others on the subject: it examines topics not typically covered, such as monotonicity, bimonotonicity, and convexity, together with their relation to partial differentiation, cubature rules for approximate evaluation of double integrals, and conditional as well as unconditional convergence of double series and improper double integrals. Each chapter contains detailed proofs of relevant results, along with numerous examples and a wide collection of exercises of varying degrees of difficulty, making the book useful to undergraduate and graduate students alike.

"There is no doubt that one of the key mathematical courses, perhaps the most important and fundamental one for undergraduates in various branches of science and engineering, is calculus. ... This is essentially a textbook suitable for a one-semester course in multivariable calculus or analysis for undergraduates in mathematics. ... it contains some material that would be very useful for engineers. ... I recommend this book ... for undergraduate students in mathematics and professors teaching courses in multivariable calculus." (Mehdi Hassani, The Mathematical Association of America, June, 2010)

"This book was written as a textbook for a second course in calculus ... . The authors differentiate this book from many similar works in terms of the continuity of approach between one-variable calculus and multivariable calculus, as well as the addition of several unique topics. The book is self-contained ... . Summing Up: Recommended. Lower- and upper-division undergraduates." (D. Z. Spicer, Choice, Vol. 47 (11), July, 2010)

"This text is a fairly thorough treatment of real multivariable calculus which aims to develop wherever possible notions and results analogous to those in one-variable calculus. ... Each chapter concludes with a section of notes and comments, and an extensive set of exercises." (Gerald A. Heuer, Zentralblatt MATH, Vol. 1186, 2010)

Sudhir R. Ghorpade is Institute Chair Professor in the Department of Mathematics at the Indian Institute of Technology (IIT) Bombay. He has received several awards, including the All India Council for Technical Education (AICTE) Career Award for Young Teachers and the Prof. S.C. Bhattacharya Award for Excellence in Pure Sciences. His research interests lie in algebraic geometry, combinatorics, coding theory, and commutative algebra.

Balmohan V. Limaye is Professor Emeritus in the Department of Mathematics at the Indian Institute of Technology (IIT) Bombay. He is the author of several research monographs and textbooks, including Linear Functional Analysis for Scientists and Engineers (Springer, 2016). He worked at IIT Bombay for more than 40 years and has twice received the Award for Excellence in Teaching from IIT Bombay. His research interests include Banach algebras, approximation theory, numerical functional analysis, and linear algebra.

The authors' companion volume A Course in Calculus and Real Analysis, 2e (2018) is also in the UTM series.