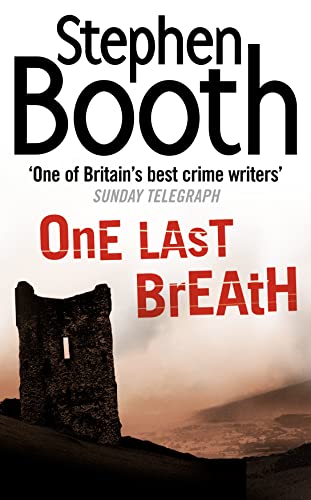 One Last Breath by Stephen Booth

An escaped convict threatens more than the summer tourist trade in the gripping fifth thriller featuring Detectives Fry and Cooper.

An escaped convict threatens more than the summer tourist trade in the gripping fifth thriller featuring Detectives Fry and Cooper.

'Today was the day Detective Constable Ben Cooper was supposed to have died. For practical purposes, he was already dead.'

Fourteen years ago Mansell Quinn was jailed for murdering his mistress. Now he has escaped and is on the run, hiding amongst the Peak District's many summer tourists. When Quinn's ex-wife is found dead, DC Cooper and his tough boss DS Fry suspect it is only a matter of time before another victim is found. And Cooper - as the son of Quinn's arresting officer - is high on the list.

As they desperately search the case files for clues and the death toll rises, darker possibilities emerge. Are the killings the work of a deranged killer who cannot be found - or a desperate man, wrongly convicted?

Praise for `One Last Breath':

`Stephen Booth endows the crime novel with a literary strength that lifts it above the general ruck...he is a crime writer who gives a satisfying read rather than a quick fix' Independent

`The complex relationship between [Cooper and Fry] is excellently drawn, and is combined with an intriguing plot and a real sense of place: Stephen Booth is an author to keep an eye on' Evening Standard

`In this atmospheric debut, Stephen Booth makes high summer in Derbyshire as dark and terrifying as midwinter' Val McDermid

`Sinks its teeth into you and doesn't let go ... A dark star may be born!' Reginald Hill

Stephen Booth was born in the Lancashire mill town of Burnley and has remained rooted to the Pennines during his career as a newspaper journalist. He lives with his wife Lesley in a former Georgian dower house in Nottinghamshire and his interests include folklore, the Internet and walking in the hills of the Peak District. `One Last Breath' is the fifth in the series.

GOR000559164
9780007172047
0007172044
One Last Breath (Cooper and Fry Crime Series, Book 5) by Stephen Booth
Stephen Booth
Cooper and Fry Crime Series
Used - Very Good
Paperback
HarperCollins Publishers
2005-04-04
656
N/A
Book picture is for illustrative purposes only, actual binding, cover or edition may vary.
This is a used book - there is no escaping the fact it has been read by someone else and it will show signs of wear and previous use. Overall we expect it to be in very good condition, but if you are not entirely satisfied please get in touch with us
Trustpilot