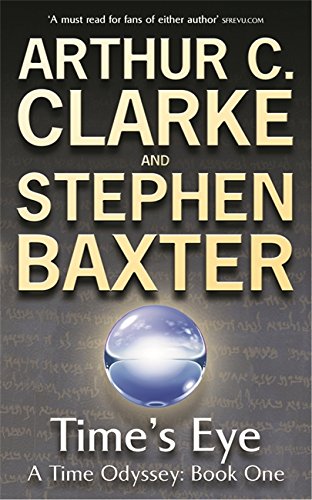 A stunning new companion series to 2001 A SPACE ODYSSEY from the world's most important living SF writer and his acknowledged heir.

1885, the North West Frontier. Rudyard Kipling is witness to a bizarre encounter between the British army and what appears to be an impossibly advanced piece of Russian technology. And then to a terrifying intervention by a helicopter from 2037. Before the full impact of this extraordinary event has even begun to sink in, Kipling, his friends and the helicopter crew stumble across Alexander the Great's army. Mankind's time odyssey has begun.

It is a journey that will see Alexander avoid his premature death and carve out an Empire that expands from Carthage to China, beating the time-slipped army of Ghenghis Khan in a battle outside the ruins of Babylon in the process. And it will present mankind with two devastating truths. Aliens are amongst us and have been manipulating our past and our future. And that future extends only as far as 2037, for that is the date Earth will be destroyed.

This is SF that spans countless centuries and carries cutting edge ideas on time travel and alien intervention. It shows two of the genre's masters at their groundbreaking best.

Arthur C. Clarke was born in Minehead in 1917. During the Second World War he served as an RAF radar instructor, rising to the rank of Flight-Lieutenant. After the war he won a BSc in physics and mathematics with first class honours from King's College, London. One of the most respected of all science-fiction writers, he also won the KALINGA PRIZE, the AVIATION SPACE-WRITERS PRIZE,and the WESTINGHOUSE SCIENCE WRITING PRIZE. He also shared an OSCAR nomination with Stanley Kubrick for the screenplay of 2001: A SPACE ODYSSEY, which was based on his story, 'The Sentinel'. He lived in Sri Lanka from 1956 until his death in 2008. To discover more about how the legacy of Sir Arthur is being honoured today, please visit http://www.clarkefoundation.org Stephen Baxter is the pre-eminent SF writer of his generation. With Terry Pratchett he has co-authored the Long Earth novels. Published around the world he has also won major awards in the UK, US, Germany, and Japan. Born in 1957 he has degrees from Cambridge and Southampton. He lives in Northumberland with his wife. Visit Stephen Baxter's website at www.stephen-baxter.com.
GOR000804002
9780575076471
057507647X
Time's Eye: A Time Odyssey Book One by Sir Arthur C. Clarke
Sir Arthur C. Clarke
Gollancz S.F.
Used - Very Good
Paperback
Orion Publishing Co
2005-05-12
352
N/A
Book picture is for illustrative purposes only, actual binding, cover or edition may vary.
This is a used book - there is no escaping the fact it has been read by someone else and it will show signs of wear and previous use. Overall we expect it to be in very good condition, but if you are not entirely satisfied please get in touch with us
Trustpilot