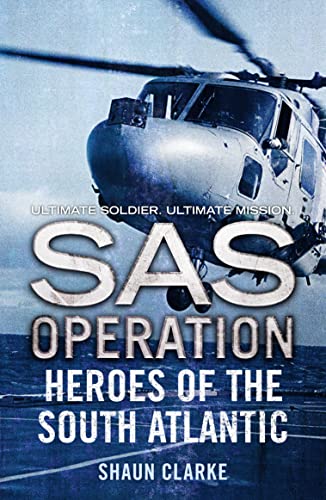 Heroes of the South Atlantic by Shaun Clarke

Heroes of the South Atlantic (SAS Operation) by Shaun Clarke

It is 1982, and a brutal, bloody war is being waged as British forces try to battle the Argentinians into surrendering the Falkland Islands.

As the fighting continues, it becomes clear to British Task Force commanders that they will need to call upon the help of the legendary Special Air Service - the SAS! Their mission, which must be shrouded in a veil of secrecy, is to infiltrate enemy territory by land and sea and from the air, performing tasks too dangerous for the average soldier.

Surviving hunger, freezing cold and constant danger, they must gather vital intelligence, engage in espionage, disrupt enemy communications and, when necessary, engage and kill the enemy. A tall enough order for an army; when it's just a small unit of men, this may prove to be a one-way mission...

GOR008541285
9780008154851
0008154856
Heroes of the South Atlantic (SAS Operation) by Shaun Clarke
Shaun Clarke
SAS Operation
Used - Very Good
Paperback
HarperCollins Publishers
2016-04-21
208
N/A
Book picture is for illustrative purposes only, actual binding, cover or edition may vary.
This is a used book - there is no escaping the fact it has been read by someone else and it will show signs of wear and previous use. Overall we expect it to be in very good condition, but if you are not entirely satisfied please get in touch with us
Trustpilot