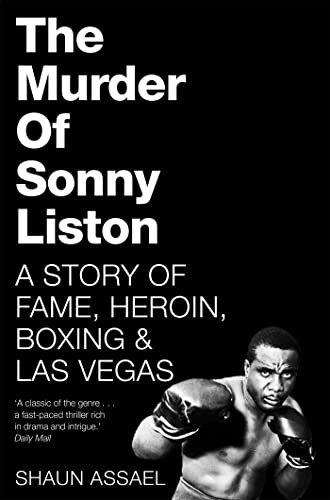 The Murder of Sonny Liston by Shaun Assael

An in-depth examination into the murder of the former Heavyweight Champion Sonny Liston and a portrait of mob-ruled 1970s Las Vegas that is as gripping as any noir fiction.

The Murder of Sonny Liston: A Story of Fame, Heroin, Boxing & Las Vegas by Shaun Assael

Against the backdrop of the pivotal era in the history of Las Vegas when the mob turned a sleep desert oasis into a gambling paradise, Shaun Assael's The Murder of Sonny Liston is both a riveting murder hunt and a stunning portrait of a city that was home to the Rat Pack, race riots and glittering high-rises along the strip.

Readers of James Ellroy's Underworld USA Trilogy will feel very much at home. * Dan Jones, Sunday Times *
The Murder of Sonny Liston is a classic of the genre . . . The cast of characters in these pages is a casino-packed assembly of the showbiz stars of a neon era who performed on that fabled Strip, heroes of the prize-ring, shadowy figures of a Mafia underworld, money-grubbing hangers-on, showgirls, straight and crooked cops. * Jeff Powell, Daily Mail *
Writing with the flair of a mystery writer and the attention to detail of an investigative journalist . . . Assael dissects the suspicious death of former heavyweight boxing champion Sonny Liston . . . The engrossing depiction of Sin City's corrupt cops, malevolent mobsters, and drug dens follows in the footsteps of Nick Tosches's The Devil and Sonny Liston . . . Assael's journey into the seedy underworld of the Las Vegas's past is worth the ride. * Publishers Weekly *
Shaun Assael delves into Las Vegas at the turn of the '70s and uncovers a thrilling mystery. Leave it to Sonny Liston to emerge as its larger-than-life anti-hero. * Nicholas Pileggi *
Mobsters, casino moguls, degenerate gamblers, junkies, strung out fighters, drug dealers, crooked cops and coke-head judges all play a role in The Murder of Sonny Liston. Shaun Assael has delved deeper into Liston's mysterious death than anybody and come up with sensational results. Investigative reporting at its finest. * Nigel Collins, Former editor-in-chief, The Ring Magazine *
As tough and pounding as its subject, this is the send-off Sonny Liston deserved. Only read it if you're interested in crime, Vegas, and boxing, or the complications of being human. * Robert Lipsyte, author of The Contender and An Accidental Sportswriter *
Drugs, booze, gambling, fixed fights. Casino moguls, crooked cops, mob bosses. The Murder of Sonny Liston has it all. Investigative reporter Shaun Assael's account of the death and life of one of boxing's biggest and saddest characters crackles with drama, tension, and suspense. It's part The Wire, part Chinatown, part The Professional-but unlike those works of fiction, all remarkably true. Stefan Fatsis, author of Word Freak and A Few Seconds of Panic * Stefan Fatsis, author of Word Freak and A Few Seconds of Panic *
Assael, a member of ESPN's investigations unit, is typically thorough in his research and approach yet manages to balance a meticulous attention to detail with a consideration for his audience, which is to say he never loses sight of the need to tell a story. The narrative is fluid and engaging, while the Las Vegas backdrop, arguably as important a character as any human being featured, is as alluring on the page as it is when witnessed in person. * Elliot Worsell Boxing News *
Shaun Assael, who has been with ESPN The Magazine since its launch in 1996, is a member of ESPN's investigations unit and a regular contributor to the prime-time show E:60. He is also the author of Wide Open: Days and Nights on the NASCAR Tour; Sex, Lies, and Headlocks, which was a New York Times bestseller; and Steroid Nation.
GOR008702914
9781509814824
1509814825
The Murder of Sonny Liston: A Story of Fame, Heroin, Boxing & Las Vegas by Shaun Assael
Shaun Assael
Used - Like New
Paperback
Pan Macmillan
2017-08-10
320
N/A
Book picture is for illustrative purposes only, actual binding, cover or edition may vary.
The book has been read, but looks new. The book cover has no visible wear, and the dust jacket is included if applicable. No missing or damaged pages, no tears, possible very minimal creasing, no underlining or highlighting of text, and no writing in the margins
Trustpilot