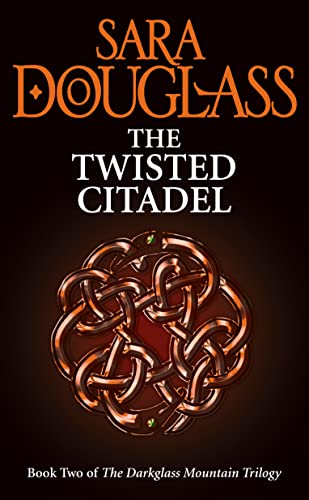 The Twisted Citadel by Sara Douglass

Sara Douglass has won legions of fans around the world for her epic tales of sorcery, forbidden love, and heart-pounding action. Now, with the DarkGlass Mountain saga, she reveals her biggest adventure yet.

Sara Douglass has won legions of fans around the world for her epic tales of sorcery, forbidden love, and heart-pounding action. Now, with the DarkGlass Mountain saga, she reveals her biggest adventure yet.

Tencendor is no more. The land is gone. But a few Sunsoars still remain, and a new foe walks the world.

Three new heroes have stepped forward: Ishbel Brunelle, priestess of the Serpent Coil; Isaiah, the Tyrant of Isembaard; and Maximillian, the Lord of Elcho Falling. Yet despite their best efforts, the dark god Kanubai has risen. And worse yet, war approaches, as the Darkglass Mountain has raised a vaste horde to ravage the land.

As the trio struggle to keep their supporters and alliances alive, the Sunsoars have their own challenges...including the chance to finally rejoin the magical Star Dance, and the appearance of the Lealfast, long-lost kin to the Icarii who may be friends...or deadly enemies. As tensions rise between the two races, Axis Sunsoar revives his elite Strike Force in a desperate bid to stop the darkness.

Praise for The Axis Trilogy:

'The twists, revelations and foreshadowings keep you turning pages'
SFX

'Absorbing. Those who like their battles bloody and realistic will get their desire, but here also are moments of great tenderness'
Starburst

GOR003548860
9780007270392
0007270399
The Twisted Citadel (The Darkglass Mountain Trilogy, Book 2) by Sara Douglass
Sara Douglass
The Darkglass Mountain Trilogy
Used - Well Read
Paperback
HarperCollins Publishers
2008-05-06
592
N/A
Book picture is for illustrative purposes only, actual binding, cover or edition may vary.
This is a used book. We do our best to provide good quality books for you to read, but there is no escaping the fact that it has been owned and read by someone else previously. Therefore it will show signs of wear and may be an ex library book
Trustpilot