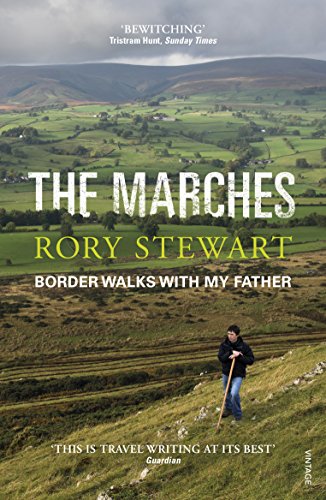 The Marches by Rory Stewart

His father Brian taught Rory Stewart how to walk, and walked with him on journeys from Iran to Malaysia. Now they have chosen to do their final walk together along 'the Marches' - the frontier that divides their two countries, Scotland and England. This book is about their experiences and a chronicle of contemporary Britain.

The Marches: Border walks with my father by Rory Stewart

Rory Stewart explores his love for the UK in this account of history, memory and landscape as he traverses the the borderlands between England and Scotland.

His father Brian taught Rory Stewart how to walk, and walked with him on journeys from Iran to Malaysia. Now they have chosen to do their final walk together along 'the Marches' - the frontier that divides their two countries, Scotland and England.

On their six-hundred-mile, thirty-day journey - with Rory on foot, and his father 'ambushing' him by car - the pair relive Scottish dances, reflect on Burmese honey-bears, and on the loss of human presence in the British landscape.
Travelling across mountain ridges and through housing estates they uncover a forgotten country crushed between England and Scotland: the Middleland. They discover unsettling modern lives, lodged in an ancient place, as their odyssey develops into a history of the British nationhood, a chronicle of contemporary Britain and an exuberant encounter between a father and a son.

And as the journey deepens, and the end approaches, Brian and Rory fight to match, step by step, modern voices, nationalisms and contemporary settlements to the natural beauty of the Marches, and a fierce absorption in tradition in their own unconventional lives.

'Suggests an open-mindedness in Stewart, a tolerance and flexibility that could make him an exceptional politician while it also continues to define him as a writer' New York Review of Books

'Travel writing at its best' Guardian

I thought at first Rory's book was about the French political party, but blow me it is all about our native heath, plus his dad, and is one of the most original books we have had in 33 years of the prize -- Hunter Davies, Lakeland Book of the Year, 2017
Engaging, intelligent, and ultimately moving. -- Stuart Kelly * Scotsman *
Suggests an open-mindedness in Stewart, a tolerance and flexibility that could make him an exceptional politician while it also continues to define him as a writer. -- Andrew Motion * New York Review of Books *
[A] bewitching book... The entrancing bond between Stewart and his father brings the book alive. -- Tristram Hunt * Sunday Times *
Engaging, intelligent and ultimately moving...in some ways, Rory Stewart resembles a Robert MacFarlane who has chosen geopolitics over metaphysics. * Scotland on Sunday *
This is travel writing at its best. -- Katherine Norbury * Observer *
Stewart is the nearest person I have identified in real life to Rudyard Kipling's Kim, the all-seeing, all-knowing man-child of Empire... The heart of the book is about love... He is observant, gently mocking and he writes beautifully. -- Melanie Reid * The Times *
He is a gift to literature. -- Sarah Sands * Evening Standard *
[Stewart] has a roving, enquiring mind, which makes him on the page...most agreeable company... This roving, discursive book is a delight to read. -- Allan Massie * Literary Review *
The Marches is a memoir full of depth and beguiling humour... His prose is captivating and I hugely admired his dedication in getting to know closely the landscape and people he serves in Parliament. -- Charlotte Runice * Prospect *
[A] substantial and very impressive book... [a] profoundly moving portrait of Stewart's father. -- Philip Marsden * Spectator *
As a collective portrait of both father and homeland, The Marches is a deeply moving, honest and loving portrait, even if Britain and Brian are seldom what they seem. -- Barnaby Rogerson * Country Life. *
The book is held together by Mr Stewart's writing, with his short chapters moving skilfully from history to personal encounter. -- Andrew Lownie * Wall Street Journal *
Stewart's descriptions are moving... This writer refreshes the parts that other writers cannot reach: he has the stamina and interest to investigate the hidden 'glamour' behind regions and peoples with unpromising veneers. -- Mary Killen * Lady *
The delight of it lies in his encounters with the specific rather than in ruminations about the general. He has an alert eye for the awkward detail - the things that don't quite fit with the tone of a scene. It makes him an enjoyable and persuasive writer. -- Ian Jack * Guardian *
[An] elegantly written account. -- Tom Chessyhre * The Times *
Like father, like son, for both come across as hugely talented, hugely driven misfits. -- National
The Marches marks him [Stewart] out not only as a writer but as a political force rooted in geographies so different to London as to shed new light on politics itself... [A] serious politician, social critic, and practical ethnographer at work. As such The Marches is a book for walkers, for those who love the Borders, and for fathers seeking inspiration in their family responsibilities... If this is the polymath as politician, then we need more of them. -- Frances Davis * Conservative Home *
This is so much more than the story of their journey - it's a superbly written, endlessly fascinating book encompassing history, geology, landscape, family memories, wars experienced and lives well lived. * Choice Magazine *
One of the most unexpected and enjoyable reads of 2016... The book fizzes erudition and is delightfully leavened by the companionship of his aged and doughty father. * Guardian, Readers' Book of the Year *

Rory Stewart OBE was born in Hong Kong in 1973. He is the author of four books, including bestsellers The Places in Between, which describes the last section of his 6,000 mile walk across Afghanistan, and The Marches, about a walk with his father in the borderlands between Scotland and England. His books have sold over half a million copies, been translated into multiple languages, and been awarded several prizes including the Ondaatje Prize of the Royal Society of Literature.

From 2010-2019 he was the Member of Parliament for Penrith and The Border. During his career as a politician he served in several ministerial roles, including as Secretary of State for International Development in 2019. He has been awarded the Order of the British Empire (for his work in Iraq), the Gold Medal of the Royal Scottish Geographical Society (for his work in Afghanistan), a Scottish BAFTA (for the documentaries he has made and presented with the BBC) and honorary doctorates from Stirling University and the American University of Paris. He tweets at @RoryStewartUK.

GOR008651869
9780099581895
0099581892
The Marches: Border walks with my father by Rory Stewart
Rory Stewart
Used - Like New
Paperback
Vintage Publishing
2017-09-21
368
Long-listed for Orwell Prize 2017 (UK)
Book picture is for illustrative purposes only, actual binding, cover or edition may vary.
The book has been read, but looks new. The book cover has no visible wear, and the dust jacket is included if applicable. No missing or damaged pages, no tears, possible very minimal creasing, no underlining or highlighting of text, and no writing in the margins
Trustpilot