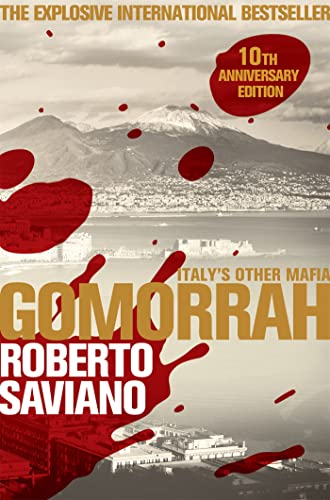 The explosive international bestseller uncovering the crime syndicate that runs the streets of Naples.

From the author of ZeroZeroZero comes Gomorrah, a bold and engrossing piece of investigative writing and one heroic young man's impassioned story of a place under the rule of a murderous organization.

With a preface to mark the ten year anniversary of publication, Roberto Saviano's groundbreaking and utterly compelling book is a major international bestseller which has to date sold 750,000 copies in Italy alone.

A groundbreaking study and a searing expose, Gomorrah is the astonishing true story of the renowned crime organization the Camorra, known by insiders as 'the System'. With a global reach, large stakes in construction, high fashion, illegal drugs and toxic waste disposal, the Camorra exerts a malign grip on cities and villages along the Neapolitan coast.

In pursuit of his subject, Roberto Saviano worked as an assistant at a Chinese textile manufacturer and on a construction site, both controlled by 'the System', and as a waiter at a Camorra wedding. Born in Naples, he recalls seeing his first murder at the age of fourteen, and how his own father, a doctor, suffered a brutal beating for trying to help an eighteen-year-old victim, left for dead in the street. Since publishing the author has received so many death threats from the Camorra that he has been assigned police protection.

Robert Saviano was born in Naples, where he still lives. Gomorrah is his first book. He is also the author of the novels ZeroZeroZero and The Piranhas.
GOR008559080
9781509843886
1509843884
Gomorrah: Italy's Other Mafia by Roberto Saviano
Roberto Saviano
Used - Very Good
Paperback
Pan Macmillan
2017-04-20
336
N/A
Book picture is for illustrative purposes only, actual binding, cover or edition may vary.
This is a used book - there is no escaping the fact it has been read by someone else and it will show signs of wear and previous use. Overall we expect it to be in very good condition, but if you are not entirely satisfied please get in touch with us
Trustpilot