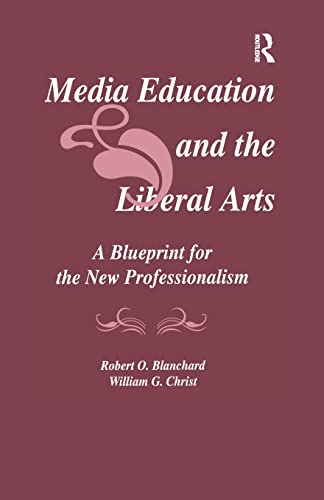 Media Education and the Liberal Arts by Robert O. Blanchard

Media Education and the Liberal Arts: A Blueprint for the New Professionalism by Robert O. Blanchard

This book provides academic reformers with a blueprint for tackling the upheaval facing media education. It calls for a new professionalism that rejects the status quo, reflects the mission and diversity of individual programs, and demands a redefinition of both traditional media studies and the liberal arts.

Communication educators should avail themselves of the arguments presented in this book if they intend to move their curricula, their students and their academic units into the 21st century....Media educators should embrace the reforms presented here...
-Journalism Quarterly

A short review cannot do justice to the fabric of reform these authors weave. Their message will tweak the consciences and stimulate the passions of readers who are part of the educational establishment....Their proposal for a New Professionalism needs to be read by anyone concerned about the product, approach, direction, or future of media education.
-Journalism Educator

...a major contribution to the field for two major reasons. First, it provides informed insight within the framework of the academy as a whole. Second and most importantly, it maintains a consistent focus on students of mass communication, their learning, their potential careers, and their futures.
-Journal of Broadcasting and Electronic Media

...the most comprehensive and best-researched history of the national movement for core curriculum to be published to date...a Croesus-like storehouse of information and citations concerning the entire spectrum of contemporary curricular research and debate.
-American Association for the Advancement of the Core Curriculum Bulletin

...an important and rigorously documented case for the reform of journalism and communication education by two of the field's most passionate and caring critics. Arguing persuasively with a wide range of evidence and from their own original studies, the authors have produced a book that everyone who cares about the education of journalists and other communicators needs to digest and debate. In a field that demands dynamic change from others, the status quo has often been unshaken by the world around it. The authors, in an argument that celebrates the liberal arts and elevates professionalism in the university, have produced a vital and compelling book. It will become `required reading' in our annual Leadership Institute.
-Everette E. Dennis
Executive Director, The Freedom Forum Media Studies Center, Columbia University

Professors Blanchard and Christ have helped open up an important debate not only about the meaning of professional media education, but also about the very concept of liberal studies in the turn-of-the-century academy. They contribute significantly to our rethinking of the necessary elements in the emerging new canon.
-Williard D. Rowland, Jr.
Professor and Dean, University of Colorado, Boulder

Journalism schools and communication departments should rethink their educational missions. And all faculty involved in that rethinking process should read this book. Blanchard and Christ ably describe the debates within and outside of the academy over the appropriate curricula for mass media programs and present a stimulating variety of ways of achieving a New Professionalism.
-James L. Baughman
University of Wisconsin, Madison

NLS9781138980716
9781138980716
1138980714
Media Education and the Liberal Arts: A Blueprint for the New Professionalism by Robert O. Blanchard
Robert O. Blanchard
Routledge Communication Series
New
Paperback
Taylor & Francis Ltd
2016-08-26
200
N/A
Book picture is for illustrative purposes only, actual binding, cover or edition may vary.
This is a new book - be the first to read this copy. With untouched pages and a perfect binding, your brand new copy is ready to be opened for the first time
Trustpilot