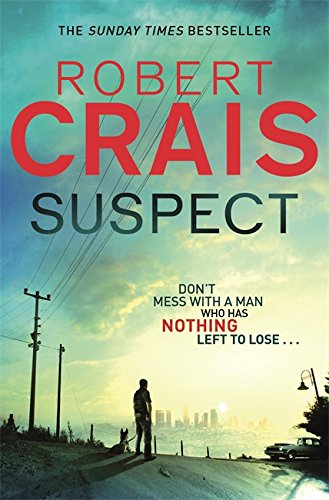 A brilliant standalone thriller from the SUNDAY TIMES bestselling author of the Elvis Cole and Joe Pike novels.

LAPD cop Scott James is not doing so well. Eight months ago, a shocking late-night assault by unidentified men killed his partner Stephanie, nearly killed him, and left him enraged, ashamed, and ready to explode. He is unfit for duty - until he meets his new partner.

Maggie is not doing so well, either. A German shepherd who survived three tours in Iraq and Afghanistan sniffing out explosives before losing her handler to an IED.

They are each other's last chance. Shunned and shunted to the side, they set out to investigate the one case that no one wants them to touch: the identity of the men who murdered Stephanie. What they begin to find is nothing like what Scott has been told, and the journey will take them both through the darkest moments of their own personal hells. Whether they will make it out again, no one can say.

Suspect is an explosive masterpiece from the Sunday Times bestselling author.

"a touching relationship between man and dog." * THE SUN *
Robert Crais is, without question, one of the very best mystery writers of all time. And in Elvis Cole and Joe Pike he has created two of the most iconic figures in any genre -- David Baldacci
Maggie is one gorgeous girl, altogether worthy of playing a leading role in SUSPECT, Robert Crais's heart-tugging novel about two wounded war veterans who nudge each other back to life after suffering a traumatic loss . . . [Maggie] holds us captive, enthralled by Crais's perceptive depiction of her amazing capabilities. * NEW YORK TIMES *

* BOOKLIST *
It takes a brave writer to try not to have animals upstage his story, and Crais makes it work almost immediately; the prologue in Afghanistan is superbly judged. He makes Maggie a real character with some of the most touching writing I've read in the crime field in ages. Using animal point of view is equally risky, but again, Crais pulls it off... a bravura piece of writing. * IRRESISTIBLE TARGETS *
"Not only exciting but also deeply moving." -- Mark Sanderson * SUNDAY TELEGRAPH *
An intriguing stand-alone thriller... Crais has created an unsentimental, page-riffling read that grips the reader. -- Myles McWeeney * IRISH INDEPENDENT *
Another heart wrenching read from Crais which makes you want more. * LIFESTYLE NORTH EAST *

Robert Crais is the author of the bestselling Cole & Pike novels. A native of Louisiana, Crais moved to Hollywood in the late 70s where he began a successful career in television, writing scripts for such major series as CAGNEY & LACEY, MIAMI VICE and HILL STREET BLUES. In the mid 80s, following his success with the TV buddy genre, Crais created a series of crime novels based around the characters Cole & Pike. In addition, Crais has also written several bestselling standalone thrillers. In 2014 he became a Grand Master of the Mystery Writers of America. Robert Crais lives in Los Angeles with his wife and family.
Find out more at www.robertcrais.com.

GOR004700080
9781409126584
1409126587
Suspect by Robert Crais
Robert Crais
Used - Very Good
Hardback
Orion Publishing Co
2013-04-11
320
N/A
Book picture is for illustrative purposes only, actual binding, cover or edition may vary.
This is a used book - there is no escaping the fact it has been read by someone else and it will show signs of wear and previous use. Overall we expect it to be in very good condition, but if you are not entirely satisfied please get in touch with us
Trustpilot