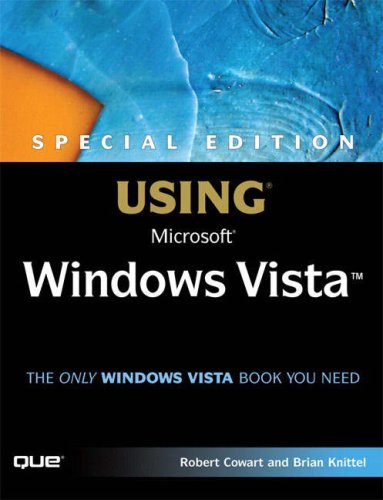 Shows you how to rebuke the onslaught of hacker attacks, protect your identity, and keep your sanity. This work also provides you with the advice on upgrading to Windows Vista - including rollout advice for IT managers. It also offers coverage of installing, configuring and surviving on a Windows Vista-based network.

Que crafted this book to grow with you, providing the reference material you need as you move toward Vista proficiency and use of more advanced features. If you buy only one book on Vista, Special Edition Using Microsoft (R)Windows (R)Vista is the only book you need.

12 Sound Recorder, DVD Maker, and Other

IV Windows Vista and the Internet

16 Email and Newsgroups with Windows

21 Mix and Match with Old Windows

29 Keeping Windows and Other Software

33 Protecting Windows from Viruses and

35 Protecting Your Network from Hackers

VIII Windows on the Move

Robert Cowart has written more than 40 books on computer programming and applications,

with more than a dozen on Windows. His titles include Windows NT Unleashed,

4.0: No Experience Required. Several of his books have been bestsellers in their category

and have been translated into more than 20 languages. He has written on a wide range of

Journal, Mac World, and Microsoft Systems Journal. In addition to working as a freelance

consultant specializing in small businesses, he has taught programming classes at the

University of California Extension in San Francisco. He has appeared as a special guest on

his spare time he is involved in the music world, producing chamber-music concerts and

playing various genres of music. He meditates regularly in hopes of rewiring his inner

Brian Knittel has been a software developer for more than 20 years. After doing graduate

work in nuclear medicine and magnetic resonance imaging technologies, he began a career

as an independent consultant. An eclectic mix of clients has led to long-term projects in

most importantly, 20 years of real-world experience with MS-DOS, Windows, and computer

Upgrading and Repairing Windows, with Scott Mueller, and is the sole author of Windows XP

Under the Hood. Brian lives in Oakland, California, and spends his free time restoring

antique computers and trying to perfect his wood-fired pizza recipes.

in Kilmarnock, Virginia, as a System Administrator. When not in school, Everette lives in

Lancaster, Virginia, where he enjoys road cycling and waterskiing on the Rappahannock

Eric Butow has authored or coauthored seven books since 2000, including Master Visually

2004 Savvy. His most recent book is The PDF Book for Microsoft Office, an e-book produced

by ExcelUser.com. He is also the CEO of Butow Communications Group (BCG), a technical

writing and web design firm based in Roseville, California. Butow also writes for

Greg Dickinson lives in Birmingham, Alabama, and has 10 years experience with computer

networking. He works for one of the top 30 banks in the country, packaging and distributing

software packages and updates to the bank's 6,000 desktops. When not wrestling

with the intricacies of enterprise networks, Greg likes to spend his time recording training

videos and singing in a barbershop chorus.

for Great-West Life. She also works as an independent contractor providing both technical

(Exam 70-293). To complement this, she also spends a portion of her time providing

Alex G. Morales first managed networked computer systems in the 1980s and has since

managed some of the world's largest Internet sites. Along with several industry certifications,

he holds a bachelor's degree in anthropology from the University of Texas, and currently

Dell, Inc. Alex lives in Austin, Texas, with his muse, Gwen, her son Evan, and Molly the

Will Schmied, MCSE, is a Senior Systems Administrator for a world-renowned children's

research hospital. As a freelance writer, Will has worked with many publishers, including

Microsoft and Pearson. Will has also worked directly with Microsoft in the MCSE examdevelopment

process and is the founder of the popular Internet certification portal,

www.mcseworld.com. Will currently resides in northern Mississippi with his wife, Chris;

their children, Christopher, Austin, Andrea, and Hannah; their dogs, Charlie and Jack; and

their cats, Smokey, Evin, and Socks.

specializes in technology education through training, writing, and public speaking. He has

taught computer troubleshooting and other subjects to thousands of students, and is the

author or coauthor of 17 books, most recently Upgrading and Repairing Networks, 5th edition,

published by Que Publishing, and has also written more than 150 magazine articles.

Evansville, Indiana, and blogs at www.markesoper.com.

experience. In recent years, Steve has worked on several books and magazine articles

and has been an editor for a popular technology magazine. Steve has spoken at conferences

engineering and plans to attend graduate school in computer science and applied physics.

Brent comes from a long line of engineers. His grandfather was a mechanical engineer, and

his father is a registered professional engineer (P.E.) in civil engineering and an adjunct professor

of engineering at the University of Virginia. After graduate school, Brent plans to

write as a contributing author.

12 Sound Recorder, DVD Maker, and Other

IV Windows Vista and the Internet

16 Email and Newsgroups with Windows

21 Mix and Match with Old Windows

29 Keeping Windows and Other Software

33 Protecting Windows from Viruses and

35 Protecting Your Network from Hackers

VIII Windows on the Move

GOR002042960
9780789734723
0789734729
Special Edition Using Microsoft Windows Vista by Robert Cowart
Robert Cowart
Used - Very Good
Hardback
Pearson Education (US)
20070104
1512
N/A
Book picture is for illustrative purposes only, actual binding, cover or edition may vary.
This is a used book - there is no escaping the fact it has been read by someone else and it will show signs of wear and previous use. Overall we expect it to be in very good condition, but if you are not entirely satisfied please get in touch with us
Trustpilot