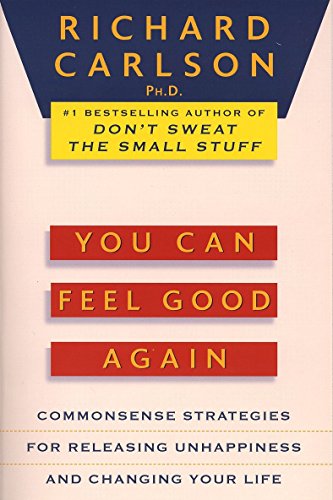 You Can Feel Good Again by Richard Carlson

A groundbreaking guide to psychological health based on the revolutionary therapeutic approach called Psychology of Mind. Simple, short-term, and accessible to all, the principles of Psychology of Mind offer a common-sense method for letting go of depression and tapping into a natural state of well-being--without drugs or psychotherapy.

You Can Feel Good Again by Richard Carlson

The words "don't sweat the small stuff" became an important part of American culture thanks to Richard Carlson's runaway bestseller, which made publishing history as the #1 book in the United States for two consecutive years.

Now, You Can Feel Good Again has one simple message: changing your thinking changes your life. Carlson offers a commonsense method that allows anyone to release unhappiness and negativity related to present circumstances or past events, and return to a natural state of well-being in the present. You Can Feel Good Again is full of humor, wisdom, and thoughtful guidance--a genuine tool to foster the realization that happiness and contentment are truly one thought away.
"This upbeat, commonsense approach may be helpful to those seeking an alternative to traditional therapy."--Library Journal

"Presents the answers we are all looking for in a profoundly simple and personal manner... A great shortcut to psychological health and recommended reading for all my clients."--Joseph Bailey, author of The Serenity Principle

"A helping hand out of a low mood."--Stephen Levine, author of A Gradual Awakening and Who Dies?

During his life, RICHARD CARLSON, Ph.D, was considered one of the foremost experts in happiness and stress reduction in the United States and around the world, and was a frequent guest on such shows as Oprah, The Today Show, The View, CNN, Fox, PBS, and over 2000 other shows. Don't Sweat the Small Stuff continued to be a publishing phenomenon, with over 20 titles in the series, two of which were co-authored with his beloved wife, Kris. He died of a pulmonary embolism in December 2006, at the age of forty-five.

The words "don't sweat the small stuff" became a part of American culture thanks to Carlson's book of the same name, which became a runaway bestseller and made publishing history as the #1 bestselling book in the United States for two consecutive years.

Don't Sweat the Small Stuff spent over 100 weeks on the New York Times bestseller list and is still considered one of the fastest selling books of all time. It has sold over 15 million copies worldwide.

GOR001321081
9780452272422
0452272424
You Can Feel Good Again by Richard Carlson
Richard Carlson
Used - Very Good
Paperback
Penguin Books Ltd
1994-09-29
180
N/A
Book picture is for illustrative purposes only, actual binding, cover or edition may vary.
This is a used book - there is no escaping the fact it has been read by someone else and it will show signs of wear and previous use. Overall we expect it to be in very good condition, but if you are not entirely satisfied please get in touch with us
Trustpilot