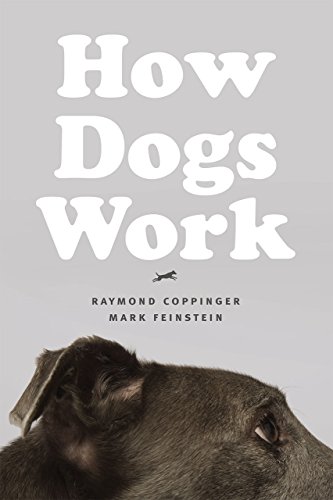 How Dogs Work by Raymond Coppinger

How Dogs Work by Raymond Coppinger

How well do we really know dogs? People may enjoy thinking about them as "man's best friend," but what actually drives the things they do? What is going on in their fur-covered heads as they look at us with their big, expressive eyes? Raymond Coppinger and Mark Feinstein know something about these questions, and with How Dogs Work, they're ready to share; this is their guide to understanding your dog and its behavior. Approaching dogs as a biological species rather than just as pets, Coppinger and Feinstein accessibly synthesize decades of research and field experiments to explain the evolutionary foundations behind dog behaviors. They examine the central importance of the shape of dogs: how their physical body (including the genes and the brain) affects behavior, how shape interacts with the environment as animals grow, and how all of this has developed over time. Shape, they tell us, is what makes a champion sled dog or a Border collie that can successfully herd sheep. Other chapters in How Dogs Work explore such mysteries as: why dogs play; whether dogs have minds, and if so what kinds of things they might know; why dogs bark; how dogs feed and forage; and the influence of the early relationship between mother and pup. Going far beyond the cozy lap dog, Coppinger and Feinstein are equally fascinated by what we can learn from the adaptations of dogs, wolves, coyotes, jackals, dingoes, and even pumas in the wild, as well as the behavior of working animals like guarding and herding dogs. We cherish dogs as family members and deeply value our lengthy companionship with them. But, isn't it time we knew more about who Fido and Trixie really are? How Dogs Work will provide some keys to unlocking the origins of many of our dogs' most common, most puzzling, and most endearing behaviors.
"Coppinger and Feinstein reveal how dog behavior has built-in biological origins and constraints and how it is influenced by genetics, the environment, and the consequences of that behavior. If you really want to know more about animal behavior, and dog behavior especially, then this is a book for you. Be prepared to be challenged and you will learn a lot."
--Robert Bailey, animal trainer
"In a complement to existing science-informed books on the subject, Coppinger and Feinstein bring the concept of dog behaviour neatly to the forefront. While we already have a fairly firm grasp on the physical inner workings of canines, How Dogs Work focuses more on the differences brought about by breed traits, and makes comparisons between dogs and an array of wild canid species, including jackals and dingoes. . . . Aimed at both lay and specialist reader, what really sets How Dogs Work apart is a host of anecdotes by Coppinger that provide compelling real-life context. Throughout the book, he draws on his experience of owning and competing with sled dogs as well as his expertise with a range of other working dogs."
--James Serpell, author of In the Company of Animals "Times Higher Education"
"How Dogs Work draws on the authors' extensive knowledge from years of experience and field experiments. They have done more serious, hands-on experiments with dogs, over a longer period of time, than almost any other researcher, which makes their research worth paying close attention to. While offering an integrated perspective for viewing and understanding the behaviors of dogs, the book is also entertaining and informative due to its frequent use of colorful examples."--Lynette Hart, author of The Perfect Puppy: How to Choose Your Dog by Its Behavior
"Packed with fascinating and provocative insights, How Dogs Work throws down the gauntlet to those who believe that dogs possess humanlike feelings and cognitive capacities."--James Serpell, author of In the Company of Animals
"Written by two of the most distinguished teachers and scientists ever to have studied dogs, Coppinger and Feinstein, this book explores the behavioral design of the dog most eloquently. The authors detail a modern perspective on our understanding of canine ethology that began with Charles Darwin and continued with Konrad Lorenz, as they build on the pedagogical approach of a course written by Ray for the UK's Centre of Applied Pet Ethology. How Dogs Work clearly describes why a dog behaves like a dog as result of being physically, physiologically, genetically, and developmentally shaped like a dog, and steadily shapes our understanding of just how and why dogs are such a special species. But this is no dry scientific tome; rather, it is delightfully and sensitively written and will surely strengthen your love of dogs by enhancing your appreciation of their evolution alongside man, their emotions, and their behavior. It is quite simply a 'must have' for all dog enthusiasts, dog behaviorists, and training professionals and is an illuminating joy to read for all dog owners."--Peter Neville, The Ohio State University and the Center of Applied Pet Ethology, Sheffield, UK
Raymond Coppinger is professor emeritus of biology at Hampshire College. His books include Dogs: A New Understanding of Canine Origin, Behavior, and Evolution, also published by the University of Chicago Press. Mark Feinstein is professor of cognitive science at Hampshire College.
GOR008668489
9780226128139
022612813X
How Dogs Work by Raymond Coppinger
Raymond Coppinger
Used - Very Good
Hardback
The University of Chicago Press
2015-10-27
224
N/A
Book picture is for illustrative purposes only, actual binding, cover or edition may vary.
This is a used book - there is no escaping the fact it has been read by someone else and it will show signs of wear and previous use. Overall we expect it to be in very good condition, but if you are not entirely satisfied please get in touch with us
Trustpilot