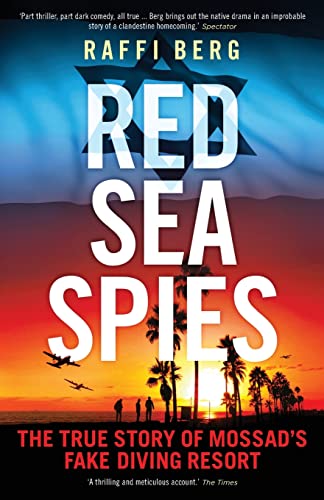 The little-known story of a daring Mossad operation and the holiday resort run by spies.

THE TRUE STORY THAT INSPIRED THE NETFLIX FILM THE RED SEA DIVING RESORT.

'Secret missions, brazen deceptions and thrilling, clandestine operations - Red Sea Spies has it all. But it has something more important, too - a genuine human mission that made a difference.' David Hoffman, author of The Billion Dollar Spy

In the early 1980s on a remote part of the Sudanese coast, a new luxury holiday resort opened for business. Catering for divers, it attracted guests from around the world. Little did the holidaymakers know that the staff were undercover spies, working for the Mossad - the Israeli secret service. Providing a front for covert night-time activities, the holiday village allowed the agents to carry out an operation unlike any seen before. What began with one cryptic message pleading for help, turned into the secret evacuation of thousands of Ethiopian Jews who had been languishing in refugee camps, and the spiriting of them to Israel.
Written in collaboration with operatives involved in the mission, endorsed as the definitive account and including an afterword from the commander who went on to become the head of the Mossad, this is the complete, never-before-heard, gripping tale of a top-secret and often hazardous operation.
'Raffi Berg has, for the first time, managed to accomplish the herculean task of rendering a complex, manifold, full of human diversity story into a credible, readable, dynamic, passionate and well-documented book.' -- Dani * Operation Commander *
'The true and most accurate story of the Mossad's Ethiopian Jewish rescue operation in Sudan over a period of around a decade has found a gifted and worthy author who deserves high praise for his monumental effort in unearthing so many key aspects that have never been publicly revealed till now.' -- Efraim Halevy, Head of the Mossad 1998-2002, from his Afterword
'Secret missions, brazen deceptions and thrilling, clandestine operations - Red Sea Spies has it all. But it has something more important, too - a genuine human mission that made a difference.' -- David Hoffman, author of The Billion Dollar Spy
'Red Sea Spies is what really happened. There is none of the Hollywood colouring-in, and yet the book is all the more vivid for it ... part thriller, part dark comedy, all true ... Berg brings out the native drama in an improbable story of a clandestine homecoming.' * The Spectator *
'An amazing story of the dogged behind-the-scenes workings of the Mossad, Israel's foreign intelligence agency, from the late 1970s to the '90s ... From the first secret airlift until 1991, writes the author, who includes helpful maps and a list of the significant characters, 28,695 Ethiopian Jews were transported to Israel, "about 80 percent of their entire community." Berg's account of the operation - remarkable due to its duration, execution, and success - reads like a spy novel.' * Kirkus *
'[A] thrilling and meticulous account.' * The Times *
'[An] outstanding debut ... Berg's moving, well-researched book stands as the definitive account of this heroic rescue mission. It deserves a wide readership.' * Publishers Weekly *
'A compelling portrayal ... providing a startling amount of detail of the day-to-day activities - putting the reader right there in the sand with the Mossad agents.' * Jewish Chronicle *
'A tense and extraordinary story.' * Choice *
'A book which should be on every Jewish bookshelf' -- Rabbi Michael Laitner, Educational Director, United Synagogue
Raffi Berg is the Middle East editor of the BBC News website, and has extensive experience reporting on Israel and the wider region. His article scratching the surface of this story was the most-read original feature in the history of the site, with more than 7 million readers to date.
NGR9781785786341
9781785786341
1785786342
Red Sea Spies: The True Story of Mossad's Fake Diving Resort by Raffi Berg
Raffi Berg
New
Paperback
Icon Books Ltd
2020-11-05
320
N/A
Book picture is for illustrative purposes only, actual binding, cover or edition may vary.
This is a new book - be the first to read this copy. With untouched pages and a perfect binding, your brand new copy is ready to be opened for the first time
Trustpilot