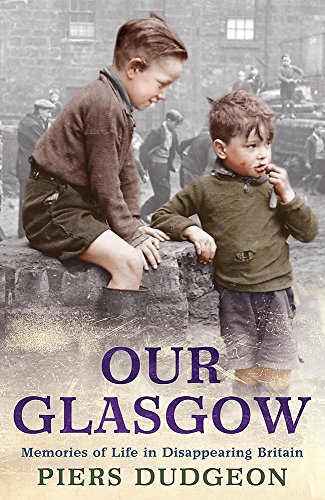 Our Glasgow by Piers Dudgeon

Our Glasgow: Memories of Life in Disappearing Britain by Piers Dudgeon

This oral history of Glasgow spans most of the last century - a time of economic downturn and eventual renewal, in which the many communities making up the city experienced upheavals that tore some apart and brought others closer together. It tells of the beating heart of no mean city in the words of the people who made it what it is. Piers Dudgeon has listened to dozens of people who remember the city as it was, and who have lived through its many changes. They talk of childhood and education, of work and entertainment, of family, community values, health, politics, religion and music. Their stories will make you laugh and cry. It is people's own memories that make history real and this engrossing book captures them vividly.

It makes for surprisingly satisfying, if sometimes shocking, reading * The Scotsman *
'Dudgeon has hit on the winning formula of allowing the history of a place to reverberate through the voices of its citizenry' * Jenni Frazer, The Jewish Chronicle *
'There is much of substance in Our Glasgow. It is written clearly and...it has strong individual voices...It is also brisk. This has its attractions as Dudgeon bounds through his topics with energy and...erudition...[T]he old Glasgow appeals, if not as a reality then as an idea drenched in warming nostalgia...One can look back in anger, astonishment or admiration. One can laugh at the troubles and be lifted by the strength of our ancestors' * The Herald *
Piers Dudgeon is the author of more than thirty works of non-fiction. He worked for ten years as an editor in London before starting his own company, Pilot Productions, publishing books with authors as diverse as John Fowles, Catherine Cookson, Peter Ackroyd, Daphne du Maurier, Shirley Conran and Ted Hughes. At the same time he wrote a number of books evocative of the spirit of place, including Dickens' London, Catherine Cookson Country, The English Vicarage Garden, The Spirit of Britain: A Guide to Literary Britain, along with Village Voices and The Country Child. Subsequently he left London for Yorkshire, where he wrote a series of oral industrial histories of Glasgow, Liverpool and London's East End, the annual Virgin Alternative Guide to British Universities, which still involves him in speaking to sixth forms across the country, and biographies of Catherine Cookson, the du Maurier family, Barbara Taylor Bradford, Maeve Binchy, the composer Sir John Tavener, the thinker Edward de Bono, and the novelist and playwright J. M. Barrie. Today he is publishing a growing list of novelists, including Angus Stewart, Giovanni Guareschi, and shortly Alessandra Lavagnino. In 2015 his biography, The Real Peter Pan: The Tragic Life of Michael Llewelyn Davies was published in the UK by The Robson Press; in 2016 in America by Thomas Dunne Books/St Martin's Press.
GOR002271308
9780755317141
0755317149
Our Glasgow: Memories of Life in Disappearing Britain by Piers Dudgeon
Piers Dudgeon
Used - Very Good
Paperback
Headline Publishing Group
2010-01-07
384
N/A
Book picture is for illustrative purposes only, actual binding, cover or edition may vary.
This is a used book - there is no escaping the fact it has been read by someone else and it will show signs of wear and previous use. Overall we expect it to be in very good condition, but if you are not entirely satisfied please get in touch with us
Trustpilot