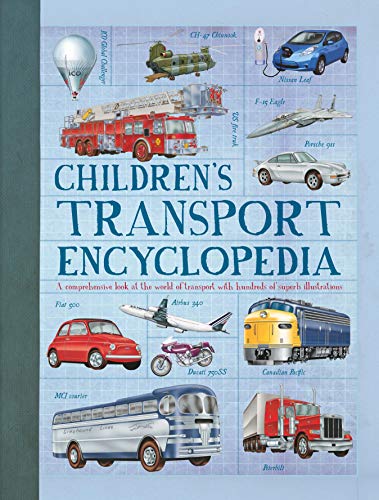 A fascinating, fact-filled look at the world of transport, with more than a thousand fullcolour illustrations.

Children's Transport Encyclopedia: A stunning encyclopedia about the incredible world of transport. by Philip Wilkinson

A fascinating, fact-filled look at the world of transport, with more than a thousand fullcolour illustrations.

This fascinating encyclopedia takes a comprehensive look at the world of transport, with transport on the road, on railways, in the water, in the air and in space.

Most of the pages contain a series of catalogue-style entries on a range of craft and vehicles. Each entry contains the story of the vehicle and a fact box to see at-a-glance aspects from speed and size to the number of people carried. In addition, each section contains feature pages that deal with especially interesting topics, such as Formula 1 racing, high-speed trains, and modern developments in low-energy transport.

Philip Wilkinson has written nearly fifty books for adults and children. They range from his first book, Amazing Buildings, which won an award from the American Institute of Architects, to A Celebration of Customs and Rituals, which was endorsed by the United Nations. He has also written several successful TV tie-ins, including What the Romans Did for Us and Restoration. He lives in the Cotswolds, England, with his wife and son.

Oliver Green is a historian who has written widely on the history of public transport in London. He is the former head curator and now research fellow at the London Transport Museum, also a Fellow of the Royal Society of Arts (FRSA) and a museums advisor to Arts Council England. Oliver lectures regularly to societies and museums, including the Victoria & Albert Museum, London.

IAN GRAHAM is a science and technology expert. He has written more than 200 books on subjects ranging from space exploration, aircraft and military technology to astronomy, transport and forensic science.

GOR009696322
9781784936129
178493612X
Children's Transport Encyclopedia: A stunning encyclopedia about the incredible world of transport. by Philip Wilkinson
Philip Wilkinson
Children's Encyclopedia
Used - Very Good
Paperback
QED Publishing
20160821
144
N/A
Book picture is for illustrative purposes only, actual binding, cover or edition may vary.
This is a used book - there is no escaping the fact it has been read by someone else and it will show signs of wear and previous use. Overall we expect it to be in very good condition, but if you are not entirely satisfied please get in touch with us
Trustpilot