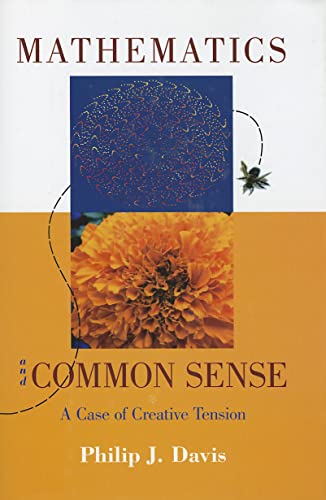 Mathematics has long suffered in the public eye through portrayals of mathematicians as socially inept geniuses devoted to an arcane discipline. This work demonstrates how mathematics surrounds, imbues, and maintains our everyday lives. It takes the reader through a point-by-point explanation of many frequently asked questions about mathematics.

From the Preface: "This book is addressed to all who are curious about the nature of mathematics and its role in society. It is neither a text book nor a specialists' book. It consists of a number of loosely linked essays that may be read independently and for which I have tried to provide a leitmotif by throwing light on the relationship between mathematics and common sense. In these essays I hope to foster a critical attitude towards both the existence of common sense in mathematics and the ambiguous role that it can play."
" "There is hardly an aspect of human existence to which mathematics cannot contribute understanding - though that is not to say that the value of human life can be reduced to a set of equations. ... In bringing some of these crucial issues to a wider audience, Davis has made a valuable contribution to the public understanding of the importance of the subject." -John Ball, New Scientist, November 2006
Davis is one of a very small group of mathematicians who are interested and able to step outside the community and take a hard look at what mathematics really 'is'. Its uses, misuses, customs, relations with the so-called 'real' world, psychology and deep nature are all grist for his voracious mill."" -David Mumford, Brown University, November 2006
is risky to trust common sense-especially when dealing with mathematics. Convincingly Phil Davis demonstrates this, first by answering a few harmless-sounding 'frequently asked questions' about his discipline and then by skillfully seducing the reader into the curious kernel of the most fascinating of all sciences: Mathematics (sometimes written with a capital M, sometimes with a lowercase m; sometimes pure, sometimes applied; sometimes familiar, sometimes strange, even to experts)."" -Rudolf Taschner, November 2006
on a long experience in mathematics as a researcher, teacher and popularizer, Davis reflects upon the subject from many points of view: not only its development and instruction, but also its overly modest status in society in general."" -Ivor Grattan-Guinness, November 2006
""The individual essays are well-written, often including amusing epigraphs and detailed bibliographies ... [and] quite interesting to read... Often I found that [Davis] articulated quite well opinions that I never knew I had."" -Darren Glass, MAA Reviews, April 2007
""The author provides many creative discussions and examples, varying from simple to more abstract structures of mathematics ... the book can be recommended to all who are interested in mathematics and its nature, beauty, and role in modern society and science."" -EMS, September 2007
""... this book was fun to read, and I recommend at least a perusal to undergraduate math students, graduate students in mathematics, and working mathematicians. Teachers of undergraduate math students should consider assigning certain essays as readings for their students. It gives a healthy view of our subject. "" -The Mathematical Intelligencer , May 2008"
Davis\, Philip J.

GOR004607138
9781568812700
1568812701
Mathematics & Common Sense: A Case of Creative Tension by Philip J. Davis
Philip J. Davis
Used - Very Good
Hardback
Taylor & Francis Inc
2006-11-30
288
N/A
Book picture is for illustrative purposes only, actual binding, cover or edition may vary.
This is a used book - there is no escaping the fact it has been read by someone else and it will show signs of wear and previous use. Overall we expect it to be in very good condition, but if you are not entirely satisfied please get in touch with us
Trustpilot