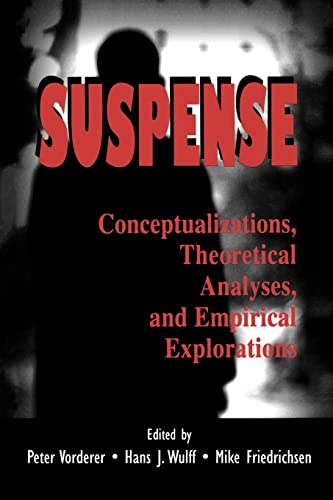 Beginning with the general assumption that suspense is a major criterion for both an audience's selection and evaluation of entertaining media offerings, this text goes on to explore how, why, and which elements of the text cause effects that are experienced as suspense.

This volume begins with the general assumption that suspense is a major criterion for both an audience's selection and evaluation of entertaining media offerings. This assumption is supported not only by the popularity of suspenseful narratives, but also by the reasons users give for their actual choice of media contents. Despite this, there is no satisfying theory to describe and explain what suspense actually is, how exactly it is caused by films or books, and what kind of effect it has on audiences. This book's main objective is to provide that theory by bringing together scholars from different disciplines who are working on the issue. The editors' goal is to reflect the "state of the art" as much as it is to highlight and encourage further developments in this area.

There are two ways of approaching the problem of describing and explaining suspense: an analysis of suspenseful texts or the reception process. Researchers who follow the more text-oriented approach identify the uncertainty of the narrative outcome, the threat or danger for the protagonist, the play with time delay, or other factors as important and necessary for the production of suspense. The more reception-oriented scholar focuses on the cognitive activities of audiences, readers' expectations, the curiosity of onlookers, their emotions, and their relationships with the protagonists. A correspondence between the two seems to be quite difficult, though necessary to determine.

Both perspectives are important in order to describe and explain suspense. Thus, the editors utilize the thesis that suspense is an activity of the audience (reader, onlooker, etc.) that is related to specific features and characteristics of the text (books, films, etc.). Their question is: What kind of relation? The answer comes from finding out how, why, and which elements of the text cause effects that are experienced as suspense.

Scholars from semiotics, literary criticism, cultural studies, and film theory assess the problem from a text-oriented point of view, dealing primarily with the how and which. Other scholars present the psychological perspective by focusing on the cognitive and emotional processes that underlie viewers' experience of suspense; that is, the reception theory tries to answer the question of why suspenseful texts may be experienced as they are.

"Overall, the editors provide readers with an in-depth analysis of suspense from many different methodological perspectives....This book, however, breaks ground in an understudied area of film studies, and it is an important work for communication scholars who study film."
-Communication Theory

Contents: Preface. H.J. Wulff, Suspense and the Influence of Cataphora on Viewers' Expectations. G. Leonard, Keeping Our Selves in Suspense: The Imagined Gaze and Fictional Constructions of the Self in Alfred Hitchcock and Edgar Allan Poe. L. Mikos, The Experience of Suspense: Between Fear and Pleasure. P. Wuss, Narrative Tension in Antonioni. N. Carroll, The Paradox of Suspense. R.J. Gerrig, The Resiliency of Suspense. W.F. Brewer, The Nature of Narrative Suspense and the Problem of Rereading. P. Ohler, G. Nieding, Cognitive Modeling of Suspense-Inducing Structures in Narrative Films. E. Tan, G. Diteweg, Suspense, Predictive Inference, and Emotion in Film Viewing. G.C. Cupchik, Suspense and Disorientation: Two Poles of Emotionally Charged Literary Uncertainty. D. Zillmann, The Psychology of Suspense in Dramatic Exposition. P. Vorderer, Toward a Psychological Theory of Suspense. M. de Wied, D. Zillmann, The Utility of Various Research Approaches in the Empirical Exploration of Suspenseful Drama. A. Mattenklott, On the Methodology of Empirical Research on Suspense. G. Nieding, P. Ohler, C. Thussbas, The Cognitive Development of Temporal Structures: How Do Children Make Inferences with Temporal Ellipses in Films? M. Friedrichsen, Problems of Measuring Suspense.
NLS9780805819663
9780805819663
0805819665
Suspense: Conceptualizations, Theoretical Analyses, and Empirical Explorations by Peter Vorderer
Peter Vorderer
Routledge Communication Series
New
Paperback
Taylor & Francis Inc
1996-05-13
376
N/A
Book picture is for illustrative purposes only, actual binding, cover or edition may vary.
This is a new book - be the first to read this copy. With untouched pages and a perfect binding, your brand new copy is ready to be opened for the first time
Trustpilot