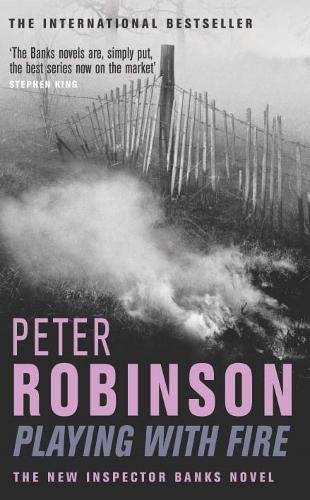 Playing With Fire by Peter Robinson

Playing With Fire by Peter Robinson

In the early hours of a cold January morning, two narrow boats catch fire on the dead-end stretch of the Eastvale canal. When signs of accelerant are found at the scene, DCI Banks and DI Annie Cabbot are summoned. But by the time they arrive, only the smouldering wreckage is left, and human remains have been found on both boats.

The evidence points towards a deliberate attack. But who was the intended victim? Was it Tina, the sixteen-year-old who had been living a drug-fuelled existence with her boyfriend? Or was it Tom, the mysterious, lonely artist?

As Banks makes his enquiries, it appears that a number of people are acting suspiciously: the interfering 'lock-keeper', Tina's cold-hearted step-father, the wily local art dealer, even Tina's boyfriend . . .

Then the arsonist strikes again, and Banks's powers of investigation are tested to the limit . . .

Peter Robinson grew up in Yorkshire and now lives in Canada. His Inspector Banks series has won numerous awards in Britain, Europe, the United States and Canada. There are now fifteen novels published by Pan Macmillan in the series. Aftermath, the twelfth, was a Sunday Times bestseller.
GOR000566477
9780330491617
033049161X
Playing With Fire by Peter Robinson
Peter Robinson
The Inspector Banks series
Used - Very Good
Paperback
Pan Macmillan
2004-08-28
464
N/A
Book picture is for illustrative purposes only, actual binding, cover or edition may vary.
This is a used book - there is no escaping the fact it has been read by someone else and it will show signs of wear and previous use. Overall we expect it to be in very good condition, but if you are not entirely satisfied please get in touch with us
Trustpilot