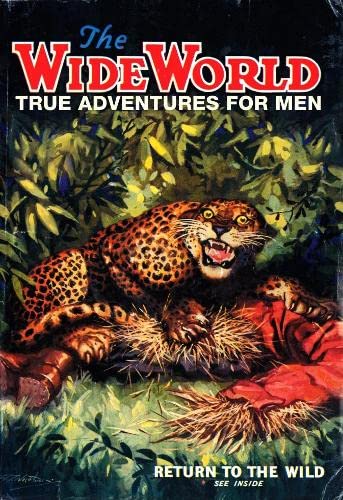 The Wide World by Paul Safont

Return to the wild with the very best of THE WIDE WORLD, the classic, illustrated adventure magazine for men.

The Wide World: True Adventures For Men by Paul Safont

From 1898 to 1965, The Wide World was the bestselling magazine for men who craved adventure. Each issue was filled with extraordinarily eccentric, but true, tales from around the world, ranging from lion hunts and shark attacks to brigandage, club bets and survival.

There are thrilling accounts of well-documented, yet forgotten exploits, such as Sir Vivian Bunny Fuch's Trans-Antarctic Expedition of 1957 and war hero Maurice Wilson's disastrous (totally insane) solo assault on Everest in 1933. There is an endless fascination with logging, lion wrestling, and the ranking of snakes in terms of their venom. Great details emerge, such as the fact that the man who survived going over Niagara Falls in a rubber ball later died after slipping on a banana skin in New Zealand, or that a Wolf will never eat a human foot. There is even real pathos, as when we learn Maurice Wilson's last diary entry before dying on Everest reads: Off again. . .Gorgeous day.

Recounted in wonderful, muscular prose (in which a wet suit is a `free swimming aqua-lung outfit') and accompanied by maps, editorials, brief reports and adverts of sublime absurdity, this anthology will include the best of the magazine, presented in it's original design, with colour reproductions of its striking jackets throughout.

Paul Safont is the pseudonym of an English lecturer long obsessed with the treasure trove of WIDE WORLD MAGAZINE.
GOR002993211
9781405049313
1405049316
The Wide World: True Adventures For Men by Paul Safont
Paul Safont
Used - Very Good
Hardback
Pan Macmillan
20041015
192
N/A
Book picture is for illustrative purposes only, actual binding, cover or edition may vary.
This is a used book - there is no escaping the fact it has been read by someone else and it will show signs of wear and previous use. Overall we expect it to be in very good condition, but if you are not entirely satisfied please get in touch with us
Trustpilot