Ready to Trample on All Human Law Paul A. Jarvie 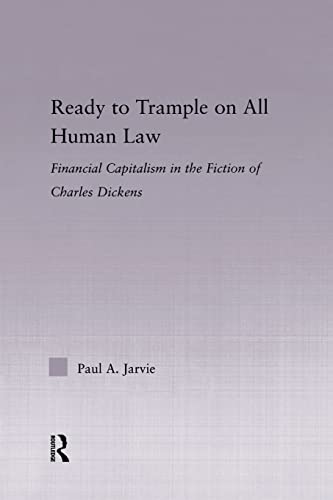 Ready to Trample on All Human Law by Paul A. Jarvie

Ready to Trample on All Human Law: Finance Capitalism in the Fiction of Charles Dickens by Paul A. Jarvie

This book explores the relationship between Dickens's novels and the financial system. Elements of Dickens's work form a critique of financial capitalism. This critique is rooted in the difference between use-value and exchange-value, and in the difference between productive circulations and mere accumulation. In a money-based society, exchange-value and accumulation dominate to the point where they infect even the most important and sacred relationships between parts of society and individuals.

This study explores Dickens's critique from two very different points of view. The first is philosophical, from Aristotle's distinction between "chrematistic" accumulation and "economic" use on money through Marx's focus on the teleology of capitalism as death. The second view is that of nineteenth-century financial journalism, of "City" writers like David Morier Evans and M. L. Meason,, who, while functioning as "cheerleaders" for financial capitalism, also reflected some of the very real "dis-ease" associated with capital formation and accumulation.

The core concepts of this critique are constant in the novels, but the critique broadens and becomes more pessimistic over time. The ill effects of living in a money-based society are presented more as the consequences of individual evil in earlier novels, while in the later books they are depicted as systemic and pervasive. Texts discussed include Nicholas Nickleby, A Christmas Carol, Little Dorrit and Our Mutual Friend.

Introduction: Dickens's Evolving Critique of Financial Capitalism 1. "I hold myself released from such hard bargains as these": Nicholas Nickleby and "Brotherly" Capitalism 2. "With what a strange mastery it seized him for itself": The Conversion of the Financier in A Christmas Carol 3. "Terribly wild rang the panic cry": Finance, Panic and the Struggle for Life in Little Dorrit 4."Among the dying and the dead": Metonymy and Finance Capitalism in Our Mutual Friend
NLS9780415869461
9780415869461
0415869463
Ready to Trample on All Human Law: Finance Capitalism in the Fiction of Charles Dickens by Paul A. Jarvie
Paul A. Jarvie
Studies in Major Literary Authors
New
Paperback
Taylor & Francis Ltd
2015-04-27
216
N/A
Book picture is for illustrative purposes only, actual binding, cover or edition may vary.
This is a new book - be the first to read this copy. With untouched pages and a perfect binding, your brand new copy is ready to be opened for the first time
Trustpilot