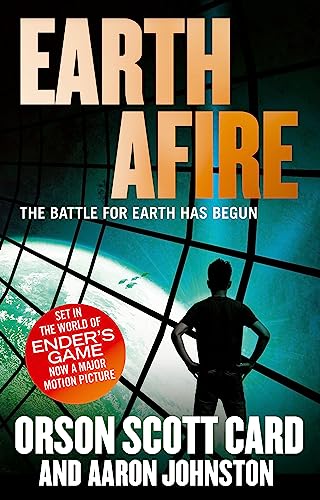 THE FUTURE OF HUMANITY HANGS IN THE BALANCE

One hundred years before Ender's Game, the aliens arrived on Earth with fire and death. This is the story of the First Formic War.

Victor Delgado beat the alien ship to Earth, but just barely. Not soon enough to convince sceptical governments that there was a threat. They didn't believe that until space stations and ships and colonies went up in sudden flame.

And when that happened, only Mazer Rackham and the Mobile Operations Police could move fast enough to meet the threat . . .

A standout tale of SF adventure that gives Ender series fans fascinating backstory to the classic Ender's Game -- LIBRARY JOURNAL on EARTH UNAWARE
The story progresses nimbly, with plenty of tension and excitement and Card's usual well-developed characters -- KIRKUS REVIEWS on EARTH UNAWARE
Literate prose and superlative characterisation . . . excellent -- BOOKLIST on EARTH UNAWARE
The sections that feature highly intelligent, self-reliant children--Card's trademark--are as excellent as ever; elsewhere there's plenty of solid action, well-developed characters....Another solidly engrossing installment, where the aliens are really just a sideshow: What we're witnessing is how and why Ender's child armies came to be. -- KIRKUS REVIEWS on EARTH FIRE
While the reader knows who wins the war, the fate of the engaging characters in this story is up in the air. Thirty-five years after he introduced Ender to the world, it's great to see that Orson Scott Card is still making magic in this imaginative world. -- NY JOURNALS OF BOOKS on EARTH AFIRE
The pacing and the vivid action scenes will satisfy hard-core military-SF buffs. At the same time, the characters and the ethical foundations under them are at the high level we have come to associate with Card. Laying their own foundations under Card's Ender Wiggins saga, the Formic Wars promise to add to Card's already high reputation and to his collaborator's as well. -- BOOKLIST, starred review on EARTH AFIRE
Card and Johnston explore human ignorance and compassion through a tapestry of galactic warfare in the second volume of the Formic Wars trilogy.... Social upheavals and political ineptitude are realized through rich characterization and brisk action. -- PUBLISHERS WEEKLY on EARTH AFIRE

Orson Scott Card is the international bestselling and award-winning author of the science fiction classic novel ENDER'S GAME, the Ender saga, the Alvin Maker series and the Homecoming series.

GOR005078055
9780356502755
0356502759
Earth Afire: Book 2 of the First Formic War by Orson Scott Card
Orson Scott Card
First Formic War
Used - Very Good
Paperback
Little, Brown Book Group
2013-06-04
480
N/A
Book picture is for illustrative purposes only, actual binding, cover or edition may vary.
This is a used book - there is no escaping the fact it has been read by someone else and it will show signs of wear and previous use. Overall we expect it to be in very good condition, but if you are not entirely satisfied please get in touch with us
Trustpilot