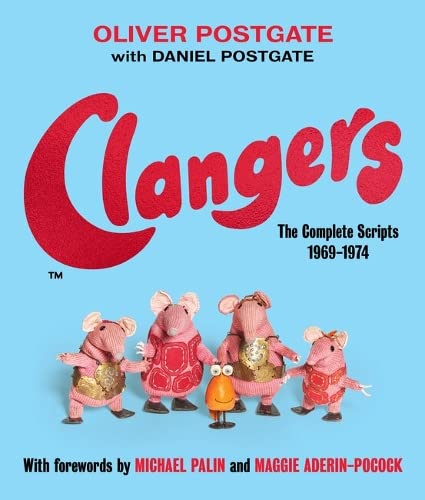 The Clangers memorably spoke in a language played on swannee whistles.

No one expected them to have scripts.

Within an ancient barn nestled in the heart of the Kent countryside, Smallfilms founders Oliver Postgate and Peter Firmin created one of the most beloved BBC children's series of the twentieth century: Clangers.

Clangers: The Complete Scripts 1969-1974 is the ultimate compendium of scripts from the original two series of the show in one lavishly illustrated volume. These previously unseen scripts sit alongside original writing from Daniel Postgate - son of the original creator Oliver Postgate - exploring the inspiration for and lasting cultural impact of the show, new and historical photographs, Peter's original illustrations, Oliver's handwritten musical notations and more.

The joyful revelation that the Clangers' often colourful words were scripted in English brings an exciting new dimension to the Smallfilms legacy.

Oliver Postgate was one of the greatest children's storytellers of the modern era. His work, which includes The Clangers, Ivor the Engine, The Pogles, Noggin the Nog and Bagpuss, is beloved by generations.

Daniel Postgate was born in Whitstable, Kent. After his schooling he worked in catering and furniture painting before moving to London to work as a freelance cartoonist for The Sunday Times, Radio Times, The Biochemist and Loot, among others. He went on to become an award-winning author and illustrator of over 50 children's books. He is now a BAFTA-winning scriptwriter and lives back in Whitstable with his family and dogs.