England: The Autobiography none 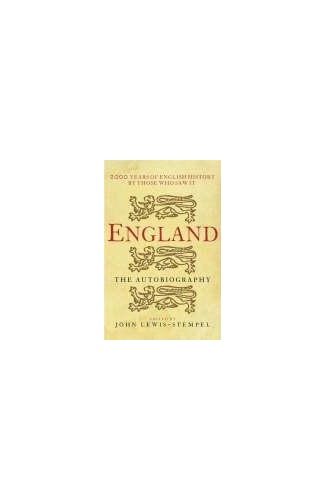 England: The Autobiography by none

England: The Autobiography: 2,000 Years of English History by Those Who Saw it Happen by none

Fountainhead of democracy, engine of the Industrial Revolution, epicentre of the globe's greatest empire and the first-ditch stand against an expansionist Germany in two world wars: England's history is among the most fascinating and influential the world has ever known.

This unique volume presents that history in unique form: first-hand, through the words of those who saw it and those who made it. All the great events of the last 2,000 years are here: the Norman Conquest, Magna Carta, the Peasants' Revolt, Henry VIII's break with Rome, the Great Fire of London, Nelson at Trafalgar, two world wars. Alongside these are the less obvious happenings which together capture the nation's social history, such as the Black Death of 1349 or life as a chimney sweep in 1817. And of course there are the things that have shaped the nature of 'Englishness', like theatregoing in Elizabethan London, fox hunting in 1898, Oates's self-sacrifice at the South Pole, the Beatles and the 1966 World Cup.

Presented chronologically and a joy to read whether cover-to-cover or dipped into as a treasury of sources, England: The Autobiography offers an intimate, vivid and revealing portrait of England and the English - and the unique place of both in world history.

John Lewis-Stempel is the author and editor of numerous books. He lives with his family in Herefordshire where he farms rare-breed cattle.

John Lewis-Stempel is a writer and farmer. He lives with his wife and two children in Herefordshire, where the last of England runs into Wales. His many previous books include Fatherhood: An Anthology and D-Day: As They Saw It.

GOR001599447
9780670915538
067091553X
England: The Autobiography: 2,000 Years of English History by Those Who Saw it Happen by none
none
Used - Very Good
Hardback
Penguin Books Ltd
20051006
480
N/A
Book picture is for illustrative purposes only, actual binding, cover or edition may vary.
This is a used book - there is no escaping the fact it has been read by someone else and it will show signs of wear and previous use. Overall we expect it to be in very good condition, but if you are not entirely satisfied please get in touch with us
Trustpilot