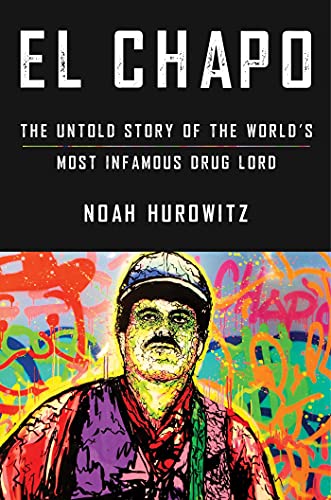 El Chapo: The Untold Story of the World's Most Infamous Drug Lord by Noah Hurowitz

This is the true story of how El Chapo built the world's wealthiest and most powerful drug-trafficking operation, based on months' worth of trial testimony and dozens of interviews with cartel gunmen, Mexican journalists and political figures, Chapo's family members, and the DEA agents who brought him down.

Over the course of three decades, El Chapo was responsible for smuggling hundreds of tons of cocaine, marijuana, heroin, meth, and fentanyl around the world, becoming in the process the most celebrated and reviled drug lord since Pablo Escobar. El Chapo waged ruthless wars against his rivals and former allies, plunging vast areas of Mexico into unprecedented levels of violence, even as many in his home state of Sinaloa continued to view him as a hero.

This unputdownable book, written by a great new talent, brings El Chapo's exploits into a focus that previous profiles have failed to capture. Hurowitz digs in deep beyond the legends and delves into El Chapo's life and legacy-not just the hunt for him, revealing some of the most dramatic and often horrifying moments of his notorious career, including the infamous prison escapes, brutal murders, multi-million-dollar government payoffs, and the paranoia and narcissism that led to his downfall. From the evolution of organized crime in Mexico to the militarization of the drug war to the devastation wrought on both sides of the border by the introduction of synthetic opioids like fentanyl, this book is a gripping and comprehensive work of investigative, on-the-ground reporting.
Hurowitz fleshes out the harrowing details of Mexico's drug violence and high-level corruption, and draws on interviews with former cartel insiders to document El Chapo's staggering ambitions and deep-seated paranoia.... [The author's] access to players on both sides of the drug war impresses. -Publishers Weekly
A fast-paced study of the infamous, now imprisoned Mexican drug lord and the social structures that supported and enabled his rise...Readers won't look at the war on drugs the same way after reading Hurowitz's damning account. -Kirkus
[A] much-needed revisit of the Chapo story...fast-paced, at times edgy...Hurowitz manages to capture the history of the drug war in Mexico well. -Small Wars Journal
This remarkably engaging...Truly the definitive account of the life of Joaquin Guzman, El Chapo. Yet it is about so much more than just the world's most infamous drug trafficker. Through the story of El Chapo, Hurowitz reveals in compelling fashion the calculated and violent absurdity that is the so-called War on Drugs-a war that has proven more effective in killing, terrorizing, and repressing poor people across the globe than stopping the flow of illicit drugs. This impressively researched book is essential reading. -Alexander Avina, author of Specters of Revolution: Peasant Guerrillas in the Cold War Mexican Countryside
El Chapo buries the sensationalism and strips the myths from Mexico's most famous drug lord. Instead Hurowitz gives us a complex, but no less rollicking, portrait of a man caught between America's never-ending demand for narcotics, its persistent need for a scapegoat and a Mexican state always happy to dish one up. El Chapo is true crime biography done right. -Benjamin T. Smith, author of The Dope: The Real History of the Mexican Drug Trade
Hurowitz did what a few American journalists or writers do: he went to Mexico to capture the background of the events that describe and explain the failure of the American war on drugs and the rise of criminals like Chapo Guzman. El Chapo is a great book, easy to digest for readers and a fabulous explanation with a healthy narrative of the cruel reality on both sides of the Rio Bravo about narcotrafficking, corruption and political blindness. -J. Jesus Esquivel, Washington DC correspondent for Proceso magazine and author of El Juicio: Cronica de la caida del Chapo
A rare achievement: a page-turning, true crime narrative with a deep and well-researched analysis. Hurowitz details the rise to power of Joaquin 'El Chapo' Guzman, but never takes his eye off the structures of power that facilitated it, within both the Mexican government and the global economy. -Christy Thornton, assistant professor of sociology and Latin American studies at Johns Hopkins University and author of Revolution in Development: Mexico and the Governance of the Global Economy
Noah Hurowitz is a journalist based in New York City. He covered the trial of El Chapo for Rolling Stone, and his work has also appeared in The Village Voice, The Baffler, New York magazine, and many more. El Chapo is his first book.
NGR9781982133757
9781982133757
1982133759
El Chapo: The Untold Story of the World's Most Infamous Drug Lord by Noah Hurowitz
Noah Hurowitz
New
Hardback
Simon & Schuster
20210916
448
N/A
Book picture is for illustrative purposes only, actual binding, cover or edition may vary.
This is a new book - be the first to read this copy. With untouched pages and a perfect binding, your brand new copy is ready to be opened for the first time
Trustpilot