A Friend of the Family Nicola Thorne 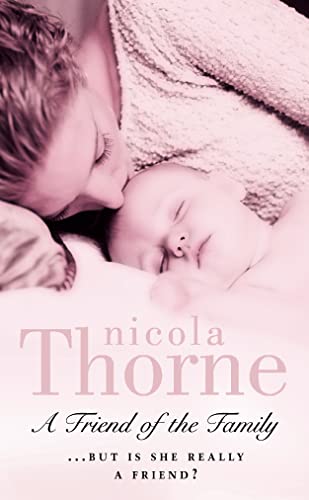 A Friend of the Family by Nicola Thorne

A contemporary novel which combines the intriguing subjects of surrogacy and obsessive love.

A Friend of the Family by Nicola Thorne

A contemporary novel which combines the intriguing subjects of surrogacy and obsessive love.

Tina and Steve seem like the golden couple: rich, good looking with everything they could want except a child of their own. Tina is a very beautiful but temperamental former model, Steve a successful businessman with international interests, but he also wants to develop his stately home in the country as a garden centre and leisure complex. The lynchpin to this enterprise is Louise who, though not unattractive, is solid and sensible and has loyally and devotedly worked for Steve for a number of years, since before his marriage to Tina which came as a shock to her.

Louise becomes obsessed with Steve. Her wish to be more closely bound to him leads her to make the radical suggestion that she should be a surrogate mother to his much wanted child by Tina. The consequences of this offer and the effect it has on the relationships not only of the three people most intimately concerned, but also their family and friends, is the subject of this riveting novel.

Nicola Thorne was born in South Africa and educated at the LSE. A prolific writer of historical and contemporary fiction, she is one of the top PLR earners in the country.

GOR003790114
9780006513667
0006513662
A Friend of the Family by Nicola Thorne
Nicola Thorne
Used - Very Good
Paperback
HarperCollins Publishers
20020715
224
N/A
Book picture is for illustrative purposes only, actual binding, cover or edition may vary.
This is a used book - there is no escaping the fact it has been read by someone else and it will show signs of wear and previous use. Overall we expect it to be in very good condition, but if you are not entirely satisfied please get in touch with us
Trustpilot