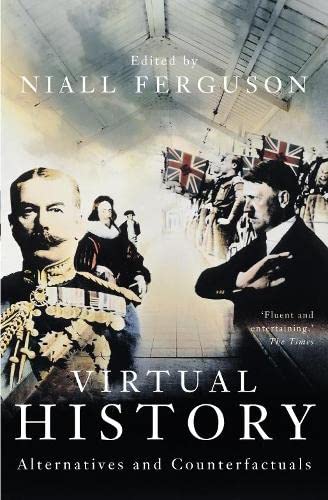 What if Britain had stayed out of WW1? What if Germany had won WW2? These are just some of the questions answered this revolutionary book in which leading historians explore what would have happened if nine momentous events had turned out differently.

'Fluent and entertaining.' The Times

'Ferguson . . . constructs an entire scenario starting with Charles I's defeat of the Covenanters, running through three revolutions, the American, the French and the Russian - that did not happen and climaxing with the collapse of the West, ruled by an Anglo American empire, in the face of a mighty transcontinental, tsarist Russian imperium . . . A welcome, optimistic assault on an intellectual heresy that has done much, much more harm than good.' Brian Appleyard, Sunday Times

'Quite brilliant, inspiring for the layman and an enviable tour de force for the informed reader . . . A wonderful book . . . lucid, exciting and easy to read.' Claus von Bulow, Literary Review

'The implications of Virtual History deserve to be meditated by every historian . . . a talented and imaginative team of historians who tackle with counterfactual verve a series of mostly twentieth century turning points.' Christopher Andrew, Daily Telegraph

Edited by Niall Ferguson, Fellow and Tutor in Modern History at Jesus College, Oxford, and a well published and highly respected historical writer. Other contributors are John Adamson, J.C.D. Clark, Alvin Jackson, Andrew Roberts, Michael Burleigh, Jonathan Haslam, Diane Kunz and Mark Almond.
GOR001390749
9780330413039
0330413031
Virtual History: Alternatives and Counterfactuals by Niall Ferguson
Niall Ferguson
Used - Very Good
Paperback
Pan Macmillan
2003-03-07
560
N/A
Book picture is for illustrative purposes only, actual binding, cover or edition may vary.
This is a used book - there is no escaping the fact it has been read by someone else and it will show signs of wear and previous use. Overall we expect it to be in very good condition, but if you are not entirely satisfied please get in touch with us
Trustpilot