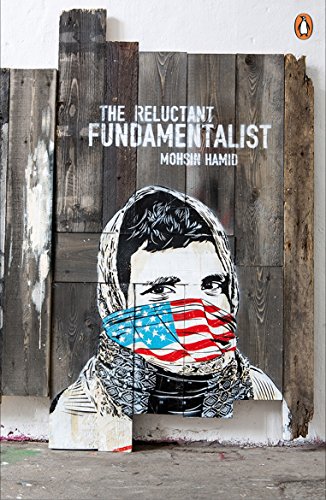 The Reluctant Fundamentalist by Mohsin Hamid

'Excuse me, sir, but may I be of assistance? Ah, I see I have alarmed you. Do not be frightened by my beard. I am a lover of America...' So speaks the mysterious stranger at a Lahore cafe as dusk settles. Invited to join him for tea, you learn his name and what led this speaker of immaculate English to seek you out.

The Reluctant Fundamentalist by Mohsin Hamid

So speaks the mysterious stranger at a Lahore cafe as dusk settles. Invited to join him for tea, you learn his name and what led this speaker of immaculate English to seek you out. For he is more worldy than you might expect; better travelled and better educated. He knows the West better than you do. And as he tells you his story, of how he embraced the Western dream -- and a Western woman -- and how both betrayed him, so the night darkens. Then the true reason for your meeting becomes abundantly clear . . .

Mohsin Hamid is the author of three novels: The Reluctant Fundamentalist, Moth Smoke and How to Get Filthy Rich in Rising Asia. His fiction has been translated into over thirty languages, received numerous awards, and been shortlisted for the Man Booker Prize. He has contributed essays and short stories to publications such as the Guardian, The New York Times, Financial Times, Granta, and Paris Review. Born and mostly raised in Lahore, he spent part of his childhood in California, studied at Princeton University and Harvard Law School, and has since lived between Lahore, London, and New York.

The PENGUIN STREET ART series marries timeless writing with enduring design. Some of the world's leading street artists have designed new covers especially for ten classic contemporary books from Penguin: Hawksmoor by Peter Ackroyd / Armadillo by William Boyd / And The Ass Saw the Angel by Nick Cave / What a Carve Up by Jonathan Coe / Americana by Don DeLillo / Then We Came to the End by Joshua Ferris / The Reluctant Fundamentalistby Mohsin Hamid / The Believers by Zoe Heller / How to Be Good by Nick Hornby / Lights out for the Territory by Iain Sinclair

Gripping... remains taut until the final pages...an elegant and sharp indictment of the clouds of suspicion that now shroud our world * Observer *
A quietly told, cleverly constructed fable of infatuation and disenchantment with America, set on the treacherous faultlines of current east/west relations, and finely tuned to the ironies of mutual - but especially American - prejudice and misrepresentation...increasingly tense...genuinely provocative...intelligent, highly engaging * Guardian *
Elegant, provocative . . . beautifully measured prose . . . a delicate meditation on the nature of perception and prejudice * Daily Mail *
Masterful . . . A multi-layered and thoroughly gripping book, which works as a poignant love story, a powerful dissection of how US imperialist machinations have turned so many people against the world's superpower - and as a thriller that subtly ratchets up the nerve-jangling tension towards an explosive ending * Metro *
The Reluctant Fundamentalist is an important book * Evening Standard *
A fantastic piece of work, superbly considered and controlled, with a lovely stillness and wisdom at its heart * The Times *
Beautifully written -- Philip Pullman
A profoundly contemporary story about civil wars, unstable countries and refugees pouring to the cities of the West... beautifully written, with the ghost of Camus hovering at the edge of the frame * New Statesman *
Prods the intellect, quickens the pulse and captures the imagination * Sunday Times *
Beautifully written - what a joy it is to find such intelligent prose, such clarity of thought . . . this is more exciting than any thriller I've read for a long time, as well as being a subtle and elegant analysis of the state of our world today -- Philip Pullman
Mohsin Hamid writes regularly for The New York Times, the Guardian and the New York Review of Books, and is the author of The Reluctant Fundamentalist, Moth Smoke, How to Get Filthy Rich in Rising Asia and Discontent and its Civilisations. Born and mostly raised in Lahore, he has since lived between Lahore, London and New York. His next novel, Exit West, will be published by Hamish Hamilton in spring 2017.
GOR005372886
9780241965023
0241965020
The Reluctant Fundamentalist by Mohsin Hamid
Mohsin Hamid
Penguin Street Art
Used - Very Good
Paperback
Penguin Books Ltd
20130606
224
Winner of South Bank Show Award for Literature 2008 (UK) Winner of Ambassador Book Award 2008 (UK) Winner of Asian American Literary Award 2008 (UK) Short-listed for Decibel Award 2008 (UK) Short-listed for International IMPAC Dublin Literary Award 2009 (UK)
Book picture is for illustrative purposes only, actual binding, cover or edition may vary.
This is a used book - there is no escaping the fact it has been read by someone else and it will show signs of wear and previous use. Overall we expect it to be in very good condition, but if you are not entirely satisfied please get in touch with us
Trustpilot