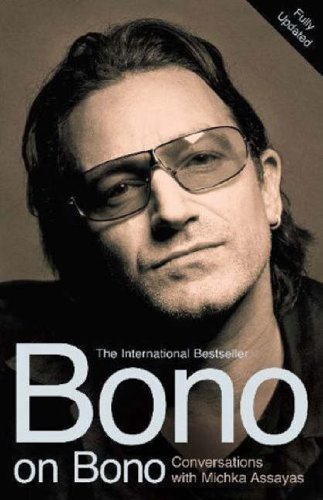 In this Sunday Times bestseller Bono - the biggest rock star in the world - tells his life story, and speaks passionately about his hopes for the future.

Bono is one of the most influential musicians at work today. Over the past twenty-five years his band, U2, have sold a staggering 130 million albums and collected 14 Grammys. Their success has made Bono one of the most recognisable faces in the world.

Here, in a series of conversations with his friend, the music journalist, Michka Assayas, Bono reflects on his transformation from extrovert singer of a small, Irish, post-punk band into an international rock star. Along the way he speaks candidly about his childhood, about his mother's death, about his Christian faith and about his difficult relationship with his father, who died recently. Bono also speaks passionately about how he has used his fame as a platform to campaign fervently on a range of global issues, and why these issues - which include the IRA ceasefire, Third World debt and, most recently, the growing AIDS crisis in Africa - are so important to each of us.

Intimate, humorous, and fiercely opinionated, BONO ON BONO is Bono's story in his own words. It will fascinate and challenge fans of U2 and general readers alike.

Witty and entertaining ... [Bono's] heart is warm, his mind is sharp, and his conversation a rich, unstoppable noise. * The Sunday Times *
'Surprisingly candid ... BONO ON BONO is not only for die-hard U2 fans; it's also an uplifting and entertaining exploration of belief and the ability to question' * Sunday Times (South Africa) *
Michka Assayas is a music journalist and novelist who lives and works in Paris. Michka met Bono in London in 1980, and was the first journalist to champion U2 outside Ireland and the United Kingdom. Michka and Bono have spent the last two years putting this book together at Bono's home in Dublin, and in Paris, Bologna and on the French Riviera.
GOR000452915
9780340832776
0340832770
Bono on Bono: Conversations with Michka Assayas by Michka Assayas
Michka Assayas
Used - Very Good
Paperback
Hodder & Stoughton General Division
2006-03-01
368
N/A
Book picture is for illustrative purposes only, actual binding, cover or edition may vary.
This is a used book - there is no escaping the fact it has been read by someone else and it will show signs of wear and previous use. Overall we expect it to be in very good condition, but if you are not entirely satisfied please get in touch with us
Trustpilot