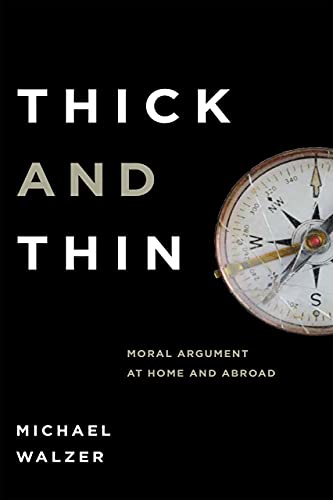 Thick and Thin by Michael Walzer

Thick and Thin frames Michael Walzer's ideas about justice, social criticism, and national identity in light of the new political world that has arisen in the past three decades.

Thick and Thin: Moral Argument at Home and Abroad by Michael Walzer

In Thick and Thin: Moral Argument at Home and Abroad, Michael Walzer revises and extends the arguments in his influential Spheres of Justice, framing his ideas about justice, social criticism, and national identity in light of the new political world that has arisen in the past three decades. Walzer focuses on two different but interrelated kinds of moral argument: maximalist and minimalist, thick and thin, local and universal. This new edition has a new preface and afterword, written by the author, describing how the reasoning of the book connects with arguments he made in Just and Unjust Wars about the morality of warfare.

Walzer's highly literate and fascinating blend of philosophy and historical analysis will appeal not only to those interested in the polemics surrounding Spheres of Justice and Just and Unjust Wars but also to intelligent readers who are more concerned with getting the arguments right.

Thick and Thin is extremely readable, engaging and perceptive, ambitiously drawing into a unified framework a variety of difficult moral and political issues. -Times Literary Supplement

[This] is a moving, eloquent, and at times inspriring meditation on the problem of obligation . . . Walzer writes on some of the most explosive issues of the day in a voice that is always calm and thoughtful. Our culture is thicker because of his presence. -Commonweal

Walzer thoughtfully answers objections to his many influential volumes of social criticism. . . . After five tight chapters, Walzer posits that we are all made up of several selves-based in our histories, identities, and associations-that we juggle as we confront a world of complex decisions and ambiguous choices. It is among those selves, rather than in a community of eager discussants, that the most profound moral reasoning occurs, a commentary on what Walzer perceives as the current sad state of public discussion and moral debate. . . .[T]his is a well-argued . . . set of carefully wrought ideas on the state of public moral debate. -Kirkus Reviews

Michael Walzer crowds a remarkable amount of original thought into 100 pages. His arguments undermind both the Foucauldian claim that internal, reformist social criticism entails complicity with the status quo, and the Kantian-Habermasian claim that social criticsm must proceed from universal moral truth. -Richard Rorty (1931-2007), University of Virginia

First published in 1994, this book was an effort to define my position in the ongoing discussions of distributive justice and social criticism. The effort brought me about as close to philosophical argument as I have ever come. But Thick and Thin is chiefly a political book; I meant to defend a certain kind of left politics focused on equality at home and a liberal and constrained version of self-determination abroad. Home and abroad require different kinds of argument, which I represented with the metaphor of thick and thin-thick or maximalist arguments when we are talking to our fellow citizens, thin and minimalist arguments when we are talking to (or about) the others, citizens of foreign countries. -from the preface to the 2019 edition

Michael Walzer is Emeritus Professor of the Institute for Advanced Study at Princeton University. He is the author of Arguing About War, On Toleration, and Just and Unjust Wars.