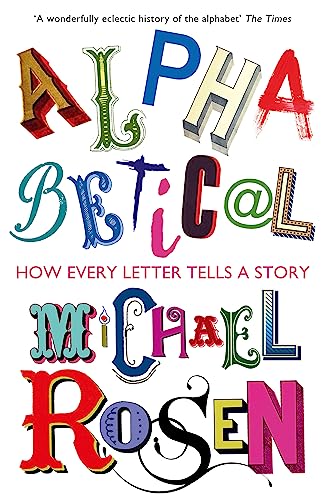 From Alphabets to Zipcodes, the surprising story of our 26 letters from million-selling author and Radio 4 language expert, Michael Rosen.

Alphabetical: How Every Letter Tells a Story by Michael Rosen

From minding your Ps and Qs to wondering why X should mark the spot, Alphabetical is a book for everyone who loves words and language. Whether it's how letters are arranged on keyboards or Viking runes, textspeak or zip codes, this book will change the way you think about letters for ever.

How on Earth did we fix upon our twenty-six letters, what do they really mean, and how did we come to write them down in the first place? Michael Rosen takes you on an unforgettable adventure through the history of the alphabet in twenty-six vivid chapters, fizzing with personal anecdotes and fascinating facts. Starting with the mysterious Phoenicians and how sounds first came to be written down, he races on to show how nonsense poems work, pins down the strange story of OK, traces our seven lost letters and tackles the tyranny of spelling, among many, many other things.

His heroes of the alphabet range from Edward Lear to Phyllis Pearsall (the inventor of the A-Z), and from the two scribes of Beowulf to rappers. Each chapter takes on a different subject - codes, umlauts or the writing of dictionaries. Rosen's enthusiasm for letters positively leaps off the page, whether it's the story of his life told through the typewriters he's owned or a chapter on jokes written in a string of gags and word games.

So if you ever wondered why Hawaiian only has a thirteen-letter alphabet or how exactly to write down the sound of a wild raspberry, read on . . .

[Michael Rosen's] beguiling journey through the alphabet will entrance anyone interested in the quirks of language and its history . . . Rosen has written a charming and thought-provoking book about what written language represents, how we use it, and the joys and mysteries therein. His humor and obvious love for his subject are winning elements * Publishers Weekly *
Enjoyable history of the alphabet * The Times *
Substantial and engaging * Guardian *
Forget party crackers - when you settle down to the turkey and trimmings this year simply make sure you have this book to hand. There's even a chapter devoted to family friendly alphabet games: perfect for playing after the Queen's been on. That letters can and should be fun, not just functional, is one of the main messages of this book * Sunday Telegraph *
The perfect book for anyone who relishes the intricacies of language and letters . . . [Rosen] reveals a gift for seamlessly meshing hard information, personal anecdote, jokes and puzzles with educational, cultural and linguistic questions and wry, pointed, observations . . . There are delights in this book for all ages * Australian *
[Michael Rosen] gives each letter a neat CV . . . enjoyable * The Times *
Michael Rosen was born in 1946 in North London and read English at Oxford. He is a former Children's Laureate and is the bestselling author of We're Going on a Bear Hunt, which won the Smarties Best Book of the Year Award, and many other books. He presents Word of Mouth on BBC Radio 4. This is the book he has always wanted to write.
GOR006062701
9781848548886
1848548885
Alphabetical: How Every Letter Tells a Story by Michael Rosen
Michael Rosen
Used - Very Good
Paperback
John Murray Press
2014-04-24
448
N/A
Book picture is for illustrative purposes only, actual binding, cover or edition may vary.
This is a used book - there is no escaping the fact it has been read by someone else and it will show signs of wear and previous use. Overall we expect it to be in very good condition, but if you are not entirely satisfied please get in touch with us
Trustpilot