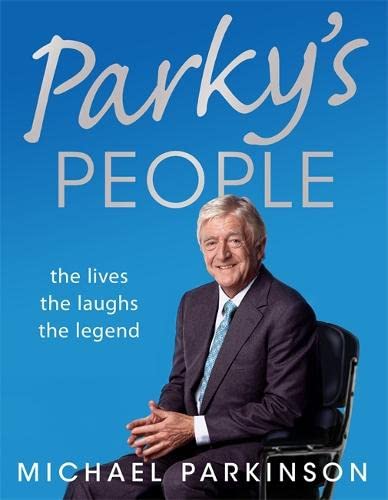 100 legendary encounters with the man who has met everyone.

Michael Parkinson occupies a unique place in the public consciousness. Through his perceptive onscreen interviews over the past five decades, he has introduced millions of people to the personalities of major international figures in sport, showbiz, politics, the arts and journalism.

In Parky's People, Parkinson sets down on record the highlights of his interviews which provide an intimate insight into the private lives and personal characters of great celebrities from around the world, from Tony Blair and Henry Kissinger, John Betjeman and WH Auden, to Ken Dodd and Elton John. Now an international celebrity himself, the man from a humble but colourful Yorkshire mining family has teased the secerets out of even the most reticent star guests, such as Fred Astaire and Ingrid Bergman, and he has drawn fascinating new information and insights from even the most frequently interviewed subjects like Peter Ustinov, David Niven and Stephen Fry.

Remarkable interviews with Edith Evans and Ben Travers demonstrate that Parkinson's empathy with the old is as evident as his easy familiarity with sportsmen like George Best, Muhammad Ali and David Beckham. Great comics such as Billy Connolly, Bob Hope, and Morecambe and Wise prove as funny on the page as on screen and it seems that the star of every Hollywood legend shines brightly under Parkinson's subtle questioning.

With a little help from his friends, Parky's People is witty, always perceptive, often wise, and never less than compulsive reading.

Born in Yorkshire, Michael Parkinson left school at sixteen with the ambition to play cricket for Yorkshire and England and to write about cricket for the Manchester Guardian. Although, he didn't manage to fulfil the first half of his ambition, he has since become one of the most successful journalists of his generation. He wrote a sports column for The Sunday Times for fifteen years and has also written for the Telegraph. He is also a legendary TV and radio presenter - his long-running chat show Parkinson was hugely popular for many years.
GOR011722772
9781444700404
1444700405
Parky's People: Intimate insights into 100 Legendary Encounters by Michael Parkinson
Michael Parkinson
Used - Like New
Hardback
Hodder & Stoughton
2010-10-14
352
N/A
Book picture is for illustrative purposes only, actual binding, cover or edition may vary.
The book has been read, but looks new. The book cover has no visible wear, and the dust jacket is included if applicable. No missing or damaged pages, no tears, possible very minimal creasing, no underlining or highlighting of text, and no writing in the margins
Trustpilot