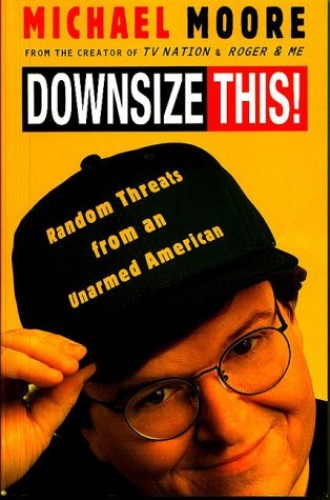 Downsize This by Michael Moore

Nothing but the truth is sacred in this hilarious screed on the state of the USA. From the creator of TV Nation and Stupid White Men.

Downsize This by Michael Moore

From the creator of the hit BBC TV Show TV NATION, the most popular documentary of all time, Emmy Award-winning ROGER AND ME, and the stupendously successful STUPID WHITE MEN, is a new edition of Michael Moore's classic book for all you disillusioned, political abstainees who are working longer hours for less pay and have had enough...

Michael Moore has established himself as someone who just won't shut up, go away, or otherwise do what political and coporate fat cats would like him to do.

With chapter headings such as 'Why Doesn't General Motors Sell Crack?' setting the tone for a biting indictment of American corporate politics, Moore's take-no-prisoners attitude is brutally funny, insightful, irrepressible. The issues raised are universal; here, Michael Moore lifts the veil on the people who set themselves up as our role models and hysterically exposes their vulnerable underbellies.

'America has an irrepressible new humorist in the tradition of Mark Twain... he is Michael Moore.' New York Times

'Michael Moore deserves on of those Genius grants so he can take on any subject of his choosing.' New York Post

GOR000536159
9780330419154
0330419153
Downsize This by Michael Moore
Michael Moore
Used - Very Good
Hardback
Pan Macmillan
2002-11-29
224
N/A
Book picture is for illustrative purposes only, actual binding, cover or edition may vary.
This is a used book - there is no escaping the fact it has been read by someone else and it will show signs of wear and previous use. Overall we expect it to be in very good condition, but if you are not entirely satisfied please get in touch with us
Trustpilot