How to Diagnose and Fix Everything Electronic, Second Edition Michael Geier 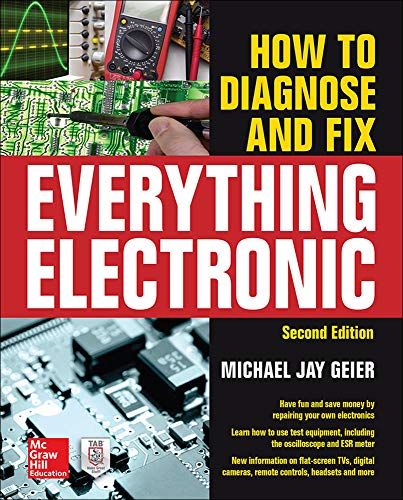 How to Diagnose and Fix Everything Electronic, Second Edition by Michael Geier

How to Diagnose and Fix Everything Electronic, Second Edition by Michael Geier

Publisher's Note: Products purchased from Third Party sellers are not guaranteed by the publisher for quality, authenticity, or access to any online entitlements included with the product.A Fully Revised Guide to Electronics Troubleshooting and Repair

Repair all kinds of electrical products, from modern digital gadgets to analog antiques, with help from this updated book. How to Diagnose and Fix Everything Electronic, Second Edition, offers expert insights, case studies, and step-by-step instruction from a lifelong electronics guru. Discover how to assemble your workbench, use the latest test equipment, zero in on and replace dead components, and handle reassembly. Instructions for specific devices, including stereos, MP3 players, digital cameras, flat-panel TVs, laptops, headsets, and mobile devices are also included in this do-it-yourself guide.

Michael Jay Geier has been an electronics technician, designer and inventor since age 6. He took apart everything he could get his hands on, and soon discovered that learning to put it back together was even more fun. By age 8, he operated a neighborhood electronics repair service that was profiled in The Miami News. He went on to work in numerous service centers in Miami, Boston and Seattle, frequently serving as the "tough dog" tech who solved the cases other techs couldn't. At the same time, Michael was a pioneer in the field of augmentative communications systems, helping a noted Boston clinic develop computer speech systems for children with cerebral palsy. He also invented and sold an amateur radio device while writing and marketing software in the early years of personal computing.

Michael holds an FCC Extra-class amateur radio license. His involvement in ham radio led to his writing career, first with articles for ham radio magazines, and then with general technology features in Electronic Engineering Times, Desktop Engineering, IEEE Spectrum, and The Envisioneering Newsletter. His work on digital rights management has been cited in several patents. Michael earned a Boston Conservatory of Music degree in composition, was trained as a conductor, and is an accomplished classical, jazz and pop pianist, and a published songwriter. Along with building and repairing electronic circuitry, he enjoys table tennis, restoring antique mopeds, ice skating, bicycling, and banging out a jazz tune on his harpsichord.

NGR9780071848299
9780071848299
0071848290
How to Diagnose and Fix Everything Electronic, Second Edition by Michael Geier
Michael Geier
New
Paperback
McGraw-Hill Education - Europe
2015-10-22
416
N/A
Book picture is for illustrative purposes only, actual binding, cover or edition may vary.
This is a new book - be the first to read this copy. With untouched pages and a perfect binding, your brand new copy is ready to be opened for the first time
Trustpilot