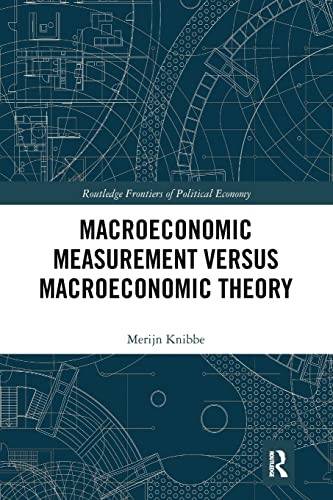 Macroeconomic theoreticians and statisticians have diverged in recent years and no longer speak the same language with the same words often having different meanings. This book maps the differences between macroeconomic theory and measurement and explores their intellectual, historical and, in some cases, ideological origins.

Ideally, scientific theory and scientific measurement should develop in tandem, but in recent years this has not been the case in economics. There used to be a time when leading economists, or their students, established or led statistical offices and took care that the measurements were consistent with the theory (and vice versa). Not anymore. Macroeconomic theorists and macroeconomic statisticians do not even speak the same language any longer. They do use the same words, such as 'consumption', 'investments' or 'unemployment' but the meanings can often be different.

This book maps the differences between macroeconomic theory and measurement and explores them in some detail while also tracking their intellectual, historical and, in some cases, ideological origins. It also explores the possible policy implications. In doing so, the book draws on two separate strands of literature which are seldom used in unison: macro-statistical manuals and theoretical macro-papers. By doing so, the book contributes to the effort to bridge the gap between them without compromising on the idea that a meaningful science of economics should, in the end, be based upon individual people and households and their social and cultural embedding instead of a 'representative consumer', or Robinson Crusoe figure.

This work is essential reading for students, economists, statisticians, and professionals.

Merijn Knibbe was born in Veldhoven, The Netherlands. He studied economics at the Rijksuniversiteit (University of) Groningen. He has written a Ph. D. thesis about production and income in Dutch agriculture between 1850 and 1950 and a habilitation on developments in Frisian agriculture between 1505 and 1832. He has also published on historical flows of feed, food and minerals in the Netherlands as well as many blogs on economic developments after the Great Financial Crisis and the extent to which economic metrics and models can be used to map and analyse the nature of this crisis.

1. Introduction; 2. Money, prices and pricing; 3. Money and how it's measured; 4. Labor and unemployment; 5. Capital (and land); 6. Consumption; 7. I stands for Gross Fixed Capital Formation; 8. (Un)real production; 9. Macro economic unit labor costs as we measure them are no indicator of competitivity

NLS9781032082097
9781032082097
1032082097
Macroeconomic Measurement Versus Macroeconomic Theory by Merijn Knibbe
Merijn Knibbe
Routledge Frontiers of Political Economy
New
Paperback
Taylor & Francis Ltd
2021-08-02
278
N/A
Book picture is for illustrative purposes only, actual binding, cover or edition may vary.
This is a new book - be the first to read this copy. With untouched pages and a perfect binding, your brand new copy is ready to be opened for the first time
Trustpilot